This activity will be live streamed from 5.30 pm and it is inside the framework of “Dialogues”, by the museum network L’Internationale, a public programme which bookmarks this day as the date for the opening of different exhibitions and activities, conceived by the member museums in the network

Former investigating judge Baltasar Garzón stands for human rights and political struggles by means of the law. From his emergence into the public arena as a result of the indictment of General Augusto Pinochet, and the case for exhuming the victims of Franco’s dictatorship during the Spanish Civil War, to contemporary struggles dealing with advocacy for human and environmental rights, Garzón has found new ways of using evidence for triggering public debate. To mark the opening of the exhibition Forensic Architecture: Towards an Investigative Aesthetics, Garzón – whose foundation, FIGBAR, currently collaborates with Forensic Architecture on a number of initiatives – will take part in a debate with his collaborator Manuel Vergara and Yolanda Álvarez, journalist and former Middle East correspondent for TVE. The debate will focus on the use of evidence, activism, the law and politics in the so-called age of post-truth. From this point of view, among Yolanda Álvarez’s investigative work for the TV programme En portada, it is worth mentioning the documentary Guerra a la mentira (War on Lying), January 2017, on how to investigate with open sources as a way of unravelling the official lies about conflicts and denouncing human rights violations. 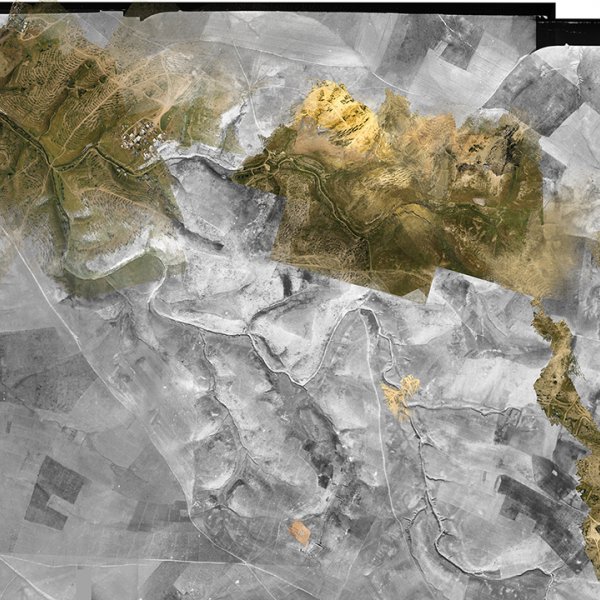 The al-Türi village and cemetery in al-’Araqib. The image is composed of photographs taken in two seasons when the threshold of the desert is alternately arid and green. HAGIT KEYSAR/PUBLIC LAB, FORENSIC ARCHITECTURE, ARIEL CAINE, ZOCHROT, AL-ARAQIB
Share

Free admission. Limited places. With simultaneous translation. This activity will be live streamed.

PARTICIPANTS
Yolanda Álvarez
International affairs journalist for TVE (Spanish Television), she reported on the Arab Spring from several countries and the Iranian Green Movement during the 2009 elections. As Middle East correspondent for TVE over a period of four years, she covered various conflicts and humanitarian crises, such as the rise and fall from power of the Muslim Brotherhood in Egypt, the earthquake in Van, Turkey, two papal visits to the Holy Land and the last two military offensives launched by Israel against Gaza (2012 and 2014). Her work on the fifty-day conflict in the Gaza Strip has won several prizes in the Valencian Community. She is currently working for the programme En portada, producing investigative documentaries such as Atrapados en Gaza (Trapped in Gaza), a harrowing testimony of civilian suffering, Esclavas del Daesh (Slaves of Daesh) and the above-mentioned Guerra a la mentira.

Baltasar Garzón
Magistrate-judge, lawyer and director of the legal firm ILOCAD SL (International Legal Organisation for Cooperation and Development), based in Madrid. President of the Baltasar Garzón International Foundation for the defence of human rights and universal jurisdiction, with projects in Spain, Mexico, Argentina, Colombia, Dominican Republic, Ecuador and Mozambique. He is also president of the Asociación Convocatoria Cívica, which aims to bring together the different political forces in Spain. Doctor Honoris Causa from thirty universities around the world, he is a member of several humanitarian organisations and centres for human rights and conflict mediation in and outside Spain.

Rosario Güiraldes was born in Buenos Aires, Argentina, and is an independent curator, architect and teacher based in New York. She is currently editor at Pioneer Works in Brooklyn. She has curated exhibitions, organised curatorial projects and public programmes at Fundación Proa, Buenos Aires; Judd Foundation, New York; International Curatorial & Studio Program, New York; Hessel Museum, Annandale-on-Hudson; and Consulate General of Argentina in New York. Güiraldes is curator of Forensic Architecture: Towards an Investigative Aesthetics at the Museo Universitario de Arte Contemporáneo in Mexico City (2017) and MACBA (2017). She is a former co-owner and curator of independent art space Peña in Buenos Aires (2011–14) where she has organised numerous curatorial projects, including exhibitions, performances, workshops, and lectures. She is also a former co-editor of Correspondencia and Compost magazines (2009–14). Güiraldes holds a B.Arch from the Universidad de Buenos Aires and an MA in Curatorial Studies from the Center for Curatorial Studies, Bard College. As of the autumn 2017 she will teach a class entitled Practising Curating at Eugene Lang College of Liberal Arts.

Manuel M. Vergara Céspedes
Spanish lawyer. Law degree and diploma in Business Studies from the Universidad Pontificia Comillas ICAI-ICADE. Director of the Legal Department of the Baltasar Garzón International Foundation (FIGBAR). Previously he worked as a consultant for the International Labour Organisation in Jakarta, Indonesia, and the UN Office of the High Commissioner for Human Rights (UNOHCHR) in Phnom Penh, Cambodia. He worked as a lawyer in Turkey and has collaborated with the International Criminal Tribunal for Rwanda, both in Arusha, Tanzania, and Kigali, Rwanda. For the last two years he has been director of a project for the development and diffusion of universal jurisdiction principles in Madrid and Buenos Aires, organising and chairing working groups in The Hague, Johannesburg, Asunción, Alfaz del Pi, Puerto Rico and Buenos Aires.

Eyal Weizman
Born in 1970 in Haifa, Israel, now residing in London, Eyal Weizman is an architect, Professor of Spatial and Visual Cultures, and Director of the Centre for Research Architecture at Goldsmiths, University of London. He is founding member of the architectural collective DAAR in Beit Sahour/Palestine. His books include Forensic Architecture: Violence at the Threshold of Detectability (Zone Books, 2017), Mengele’s Skull (with Thomas Keenan at Sternberg Press, 2012), Forensic Architecture (dOCUMENTA13 notebook, 2012), The Last of all Possible Evils (Nottetempo, 2009; Verso, 2011), Hollow Land (Verso, 2007), A Civilian Occupation (Verso, 2003), the series Territories 1, 2 and 3, Yellow Rhythms and many articles in journals, magazines and edited books. He has worked with a variety of NGOs worldwide, and was a member of the B’Tselem board of directors. He has lectured, curated and organised conferences in many institutions worldwide.

Forensic Architecture Towards an Investigative Aesthetics