In the collective imagination, fictions, metaphors and stories form a conglomeration of tales, images and ideals about what is possible and what is impossible. As such, they not only reveal many possible futures, but also very diverse presents; it is no wonder that any possibility of emancipation exists only in fiction. Compared to the rigour of the documentary, the fictions of an epoch can be seen as tools for reading the premonitions of that time, the way in which they were conceived, as well as the way the limits of imagination were established.

In parallel with the exhibition Hard Gelatin. Hidden Stories from the 80s, or rather as a footnote, the Filmoteca de Catalunya and MACBA have organised a film cycle featuring different fictions that rescue a certain spirit of the eighties: a spirit that calls out to be re-read in the light of the present. Films from before and after the failed coup d’état of 23 February 1981 that paralysed many of the activities fermenting the now much-questioned Transition. Films that pick up on fundamental aspects, from dissident sexualities to taboo subjects of conversation, from psychotropic ecstasies to the rigours of an overdose, and the power of the image as a drug to escape a reality that had changed abruptly, dislocating the established order and destroying more than a few subjectivities for the workers’ struggles. Fictions with as much relevance for the present as some of the phrases spoken by characters in Paulino Viota’s film included in this cycle – ‘With the excuse of the crisis the director is not pulling his weight, we’ll have to shake him up’ –, a rarity in Spanish cinema of the time, giving us a vision of the inside of the factory and the labour struggles, notably absent in the dominant fiction of Hollywood. In Arrebato (Rapture) we witness the ravages caused by drugs during the movida. We share Ocaña’s view of inadequacy as homosexuality resisting normalisation in Manderley, the reality of a parliament trapped in a well-meaning but obsolete rigidity in El diputado (The Deputy) and the illusions of uncommitted liberals in Tigres de papel (Paper Tigers). Films from then and now that review that period, like those of Luis López Carrasco and Chema de la Peña. Ways of looking at the past to analyse all previous futures, so as not to be trapped in time.

Film cycle coinciding with the exhibition Hard Gelatin. Hidden Stories from the 80s.
In collaboration with the Filmoteca de Catalunya. 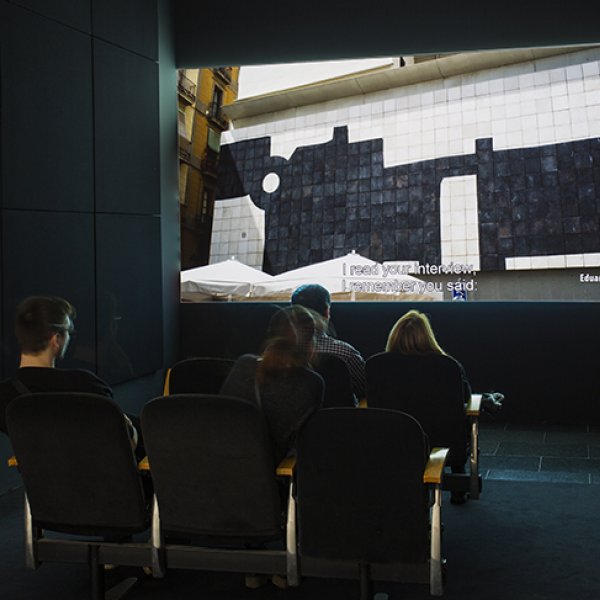 23 F is the first feature film to reconstruct the coup d’état of 1981. From the storming of the Congress to the release of the deputies, it relives the seventeen-and-a-half hours that shook the foundations of a young democracy.

Chema de la Peña is an economist and autodidact. In 1993 he created his own production company with which he made his first short films, commercials and video clips. Among his feature films are Shacky Carmine (1999); the comedy Isi & Disi, the biggest box-office draw of 2004, with two Goya Prize nominations; Sud Express (2006), filmed in France, Spain and Portugal; and Un cine como tú en un país como este (A Cinema Like You in a Country Like This, 2010), about the first generation of directors who were able to make uncensored films in 1976, a year after the death of Franco.

Garay was inspired by three of his friends – the protagonists of the film, including the painter Ocaña – to tell the story of three homosexuals who decide to spend the summer together in a country house in Santander, owned by the parents of one of them. Garay sympathetically depicts a number of attitudes that at the time were considered shocking and even unnatural. Consequently, the film was confined to adult cinemas, despite having nothing to do with conventional pornography.

Jesús Garay (Santander, 1949) is a director, writer and film critic. In 1969 he founded the group La Fábrica de Cine in Santander. He has participated from the beginning in the production of alternative films of a collective nature and in non-professional formats. He has also made commercials and corporate films. Among his best-known works are Pasión lejana (1986), La banyera (1989) and Eloïse (2009).

With a delayed and underground release, the film uses the development of a strike to offer a bitter view of the Transition, and portrays the frustrated hopes of a broad sector of Spanish society of the time. ‘Despite being written very quickly, this film is a kind of crystallisation of a very long work. My basic influences for Con uñas y dientes were Brecht and Marxism in general. The struggle against Franco led me, like many others, to Marxism and, in art, to Brecht. With the political reform that replaced the old regime, the scope of what could be said in Spanish cinema was extended. Con uñas y dientes was the first Spanish film – since the Civil War – to deal explicitly with the class struggle. It expanded the spectrum of characters that could appear on the screen, giving a voice to the working class, and it did so from a Marxist point of view, addressed especially to working class people.’ (Paulino Viota)

Santiago López Petit (Barcelona, 1950) is a philosopher. He was a militant of the workers’ autonomy during the seventies, when he worked as a chemist, and Professor of Philosophy at the Universitat de Barcelona (1990–2013). His most recent books are La movilización global (Madrid, 2009) and Hijos de la noche (Barcelona, 2014). He has promoted collective initiatives such as Dinero Gratis and Espai en Blanc.

Made during the Transition, this provocative story follows the initiation of a young, married politician in post-Franco Spain. The congressman, who has always repressed his latent homosexuality, sees this awakened during a spell in jail over a political matter. Given an S (X-rated) certificate at the time, it is one of Eloy de la Iglesia’s most controversial and daring films, and the first time that Spanish cinema openly reflected on the effects of social repression on homosexuality.

Amanda Cuesta is an independent art critic, curator and editor. She was a member of the experimental curatorial team Creatures (1996–2002) and developed several projects that questioned the traditional exhibition format. She has also been actively involved as an editor in parallel to her work as a curator. Her exhibition projects include Quinquis de los 80. Cine, prensa y calle (Gangs of the 80s. Cinema, press and the Street: CCCB, 2009), with Mery Cuesta, and Leyendas del centro. Mito, plan, cuerpo, poder (Legends from the centre. Myth, plan, body, power: Espai Cultural Caja Madrid, 2012). Since 2013, she has been co-director of La Caníbal cooperativist library.

One day a Super-8 film arrives in the hands of a film director. Getting to know the author leads him to discover a world in which the relationship between cinema and filmmaker assumes unimaginable proportions. Authentic contemporary myth, Arrebato opened a new door within Spanish cinema that nobody knew how to take advantage of. The film connected perfectly with many young people in the seventies, who felt threatened by the ghosts of the crisis, unemployment and disenchantment, and who saw drugs and nostalgia as the only way out.

Xavier Bassas is a philosopher, translator and publisher. He has a doctorate in Philosophy and French from the Université Paris-Sorbonne (Paris IV) and the Universitat de Barcelona, where he teaches literature, translation and the history of French cinema. He has specialised in the thinking of J. Derrida, J. Rancière and J.-L. Marion and has translated numerous works by these authors, as well as many films for Intermedio (Godard, Rouch, Duras, Akerman, Costa, etc.). He edits two collections of essays (for the Casus Belli and Ellago publishing houses) and co-organises the Jornades Filosòfiques de Barcelona.

Taking advantage of the elections of June 1977, Fernando Colomo proposes a panoramic view of the conflicts of the new liberals, their recently-found permissiveness and quickly-learned ‘Internationale’ in a long-play that has just been released. ‘Tigres de papel is not a perfect film, but it achieved something very timely for our usual cinematography: to prove that one could make a really new film in whose shadow others made in the same style would seem empty and old.’ (Jesús Fernández Santos)

Fernando Colomo (Madrid 1946) is a director, scriptwriter and producer, activities that, since 1992, he has developed in parallel with his production company Fernando Colomo Producciones Cinematográficas. The release in 2003 of Al sur de Granada (South of Granada) marked his 25th anniversary as a director of feature films, a field in which he made his debut in 1977 with Tigres de papel, a true revelation in the Spanish cinema of the time. Since then he has made many films as well as branching into to theatre and television. His versatility in the world of cinema led him to be nominated for the Goya awards in 2016 as best new actor in the film Isla bonita (Beautiful Island, 2015).

After the PSOE victory in the general elections of 1982, a group of young people celebrate with a party. It seemed that in Spain everything was yet to be done; everything lay in the future. However, the future also seems to approach at great speed, like a black hole devouring everything in its path. The first feature film by Luis López Carrasco, a member of the Los Hijos group, it deals with the disenchantment of the eighties in Spain with a portrait of the movida in Madrid that holds to question all the stereotypes of the time. A look at a generation that gradually turned its back on political and social commitment in the pursuit of enjoyment, individualism and materialism. ‘I have made the film as a political comment and a generational review, but it also contains many personal loves and phobias. I speak of the eighties because by portraying a group of amusing, nocturnal friends, I could make an indirect portrait of my generation.’ (Luis López Carrasco)

Luis López Carrasco (Murcia, 1981) is a producer, director and screenwriter. He is a co-founder of the audiovisual collective Los Hijos, dedicated to experimental documentary film. His work as a director has been shown in numerous international festivals such as Locarno, Rotterdam, New York, BAFICI and Viennale, and in contemporary art centres such as the Georges Pompidou, the Guggenheim, Bilbao, and the Museo Nacional Centro de Arte Reina Sofía. 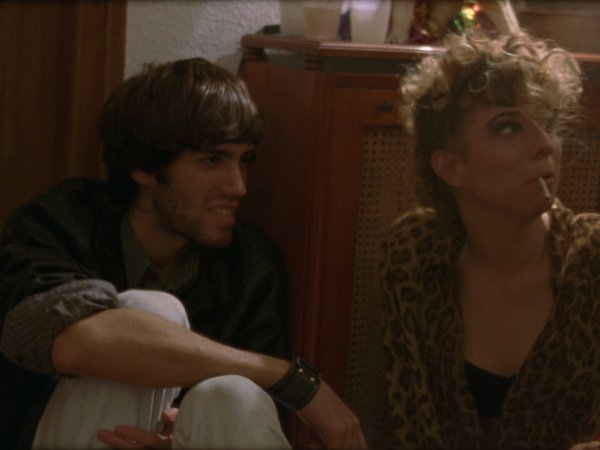