An entire range of activities loosely connected around academic, cultural and political platforms emerge as a powerful thread that challenges the actual institutional map. A new division of labor appears as a consequence of these transformations leading to an increasing circulation of critical practices. Beyond established university departments and cultural institutions, nowadays research demands an innovative model of organization that should be able to exploit collective and heterogeneous agents. Although most of these cross-disciplinary initiatives have been contemplated as being strategic and transitional, they deserve closer examination before they wither away or else get inscribed as new wings of old institutions.

This workshop will focus on the mutating nature of critical practices in as much as they traverse institutions of all kinds as well as non-institutional spaces. The questions arising will tackle the paradoxes that riddle the economy of these practices –sometimes considered marginal and experimental– as they become integrated in the neoliberal framework. Their rapid assimilation raises doubts as to whether alternative and critical positions can be maintained at all. Location, temporality and genealogy are to be considered key features of those practices which are contingently referred as research, teaching, curating and activism. Thus, there is an urgent demand to identify the different forms of knowledge and capital that flow productively, simultaneously creating alliances and interrupting mutual instrumentalisation.

The conference is the second of two gatherings organized by the Culture@Work network, a joint European project aimed at gauging how contemporary culture is put to work in new contexts. The network is founded by the School of Human Sciences at the Catholic University of Portugal (The Lisbon Consortium) in collaboration with the Barcelona Museum of Contemporary Art (MACBA) and the Department of Arts and Cultural Studies at the University of Copenhagen, Denmark. The Barcelona workshop is co-organized by MACBA and Universitat de Barcelona (UB) Art, Globalization, Interculturality / AGI Research group http://artglobalizationinterculturality.com/

The workshop is co-funded by the Culture programme of the European Union.

MACBA – along with the Lisbon Consortium, based at the Catholic University of Portugal, and the Department of Arts and Cultural Studies at the University of Copenhagen, Denmark – forms part of the Culture@Work project that has been running in the three countries since 2013, organising activities of various types.

The aims of this project are: to deepen transnational perspectives on high-level practice-based training of professionals in the cultural sector by promoting intellectual and artistic exchange with established and emerging artists; to strengthen the transfer of knowledge between Southern, Central, and Northern Europe in order to reflect a diverse and yet coherent European approach to the study of culture; and to implement a sustainable platform for trans-sectorial dialogue, promote the transnational organisation of artistic residencies at the higher education institutions, and organise academic training workshops at the partner cultural institutions, so as to enhance and upgrade existing work/university relations.

To wind up the project, MACBA is organising an international seminar focusing on artistic research, with the participation of Universitat Pompeu Fabra and Barcelona University. 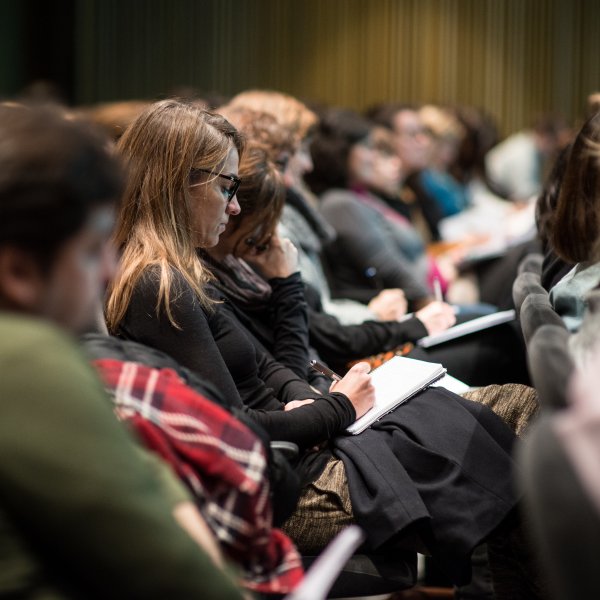 Panel 1. Venue MACBA. Aula 0
Performing Spaces
10h. Alexandra Balona. Not all who wander are lost. Benjamin Verdonck's work: from the black box, to the public space, and back again.
10:20h. Ana Dinger. Fish tanks and greenhouses: investigating the architecture of experience.
10:40h. Sarawut Chutiwongpeti. Wishes, Lies and Dreams
11h. Inês Sampaio and Joana Hortas. Are music concerts and institutions all about the music?
11:20h. Questions and discussion moderated by Prof. Anna Maria Guasch

Panel 3. Venue MACBA. Convent dels Àngels Auditorium
Performing Critique
10h.Sofia Lemos. Dusting oneself: the anatomy of research.
10.20h. Dina Campos Lopes. Damned if you do. Damned if you don’t. I Do
10:40h. Toni Hildebrandt. Illegibility and/or Invisibility: Notes on the Grounds of Inscription
11h. Nina Vurdelja. Autonomous cultural spaces in the conditions of postsocial industrial heritage.
11:20h. Canan Marasligil (Writer in residence in Copenhagen): City in Translation - An exploration of Copenhagen through its languages.
11:40h. Questions and discussion moderated by Daniela Agostinho

Joana Masó is a lecturer on French Studies at the Universitat de Barcelona and a researcher at the UNESCO Chair on Women, Development and Culture at the UB. She has translated French authors from the second half of the twentieth century such as Hélène Cixous, Jacques Derrida, Catherine Malabou and Jean-Luc Nancy, and is interested in their relation to art. She is co-editor of the writings on Jacques Derrida, Artes de lo visible (1979-2004), Writings on the Arts of Visibility (1979-2004), and recently his essays on architecture and urban space, Jacques Derrida: Les arts de l’espace. Écrits et interventions sur l’architecture.

Nanna Bonde Thylstrup is working on the politics of mass digitization, with a special focus on cultural memory, territorializations and infrastructures as well as human rights perspectives on information assemblages. She has a particular interest in the effects of privatization and commercialization.

Eyal Weizman is an architect, professor of spatial and visual cultures and director of the Centre for Research Architecture at Goldsmiths, University of London. Since 2014 he is a global professor at Princeton University. In 2011 he set up Forensic Architecture, a research agency that provides architectural evidence for violations of international law and human rights. In 2007 he set up, with Sandi Hilal and Alessandro Petti, the architectural collective DAAR in Beit Sahour/Palestine. He has worked with a variety of NGOs world wide and was member of B'Tselem board of directors.