The consensuses of the Transition seem to be failing as much in the political and institutional arena, as in the economic and territorial. Enormous social protest movements have called for a profound transformation of the structures of the country. The Constitution is at the centre of debate not only for those clamouring for real democracy, but also for the traditional parties that are being forced to implement constitutional changes. To avoid a false conclusion of this constituent opportunity, such that the changes are not superficial or result in a mere renewal of the elites, it is necessary to discuss how this process should take place and what new models of political, economic and territorial relations the new regime should build for real democratic changes to be achieved.

To provide materials for discussion we have turned to the Latin American constitutionalist experiments of the late 1990s and 2000s, which might prove useful when applied to our reality. Moreover, the inclusion of Spain and Catalonia in the European schemes of power requires an analysis of the political proposals that are currently being studied for a transformation of the European Union in a democratic key. 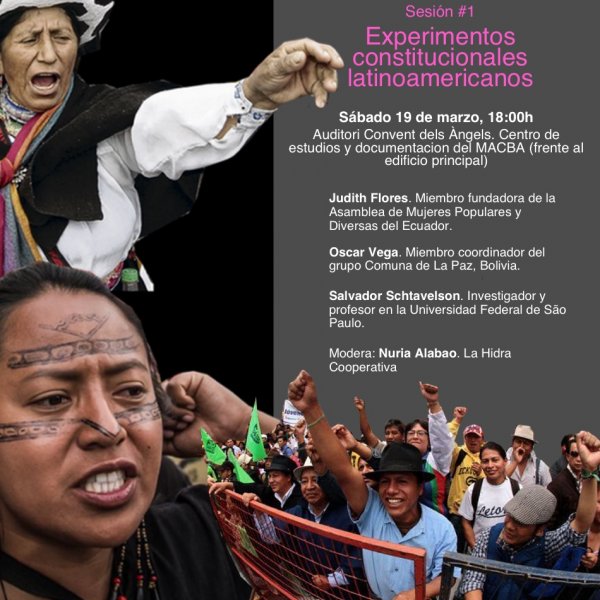 LATIN AMERICAN CONSTITUTIONAL EXPERIMENTS
This meeting aims to contribute experiences and reflections based on the Latin American constituent processes of the last two decades, particularly in Ecuador and Bolivia. New constitutions were drawn in these countries that managed to accommodate the social demands of the grassroots movements thanks to the accumulation of decades of protests. Texts that included political innovations such as pluri-nationalism or new property regimes based on common goods. However, the political upheavals of recent times have called into question some of the gains of these democratic revolutions. During this session we will also discuss the need to constantly keep alive a constituent power, capable of keeping this window of opportunity open and promoting political processes beyond their institutional limits.

PARTICIPANTS:
Judith Flores is a sociologist and a feminist and ecologist political scientist. A founding member of the Asamblea de Mujeres Populares y Diversas del Ecuador, she participated in the Asamblea Constituyente of 2008 as part of the working team of the Confederación de Nacionalidades Indígenas del Ecuador CONAIE.

Oscar Vega has a degree in philosophy and humanities from the UNAM and is a member and coordinator of the group Comuna de La Paz, Bolivia. He was director of the Casa Cultural of the Central Bank of Bolivia and member of the Centro de Estudios Constitucionales y de la Representación Presidencial for the Asamblea Constituyente. He writes about art, politics and theory in various magazines and weeklies. In 2011 he published the book Errancias. Aperturas para vivir bien (Comuna/CLACSO).

Salvador Schtavelson is a researcher and professor at the Universidad Federal de São Paulo (Brazil). He holds a PhD in anthropology and has published books on the constituent processes of Bolivia and Ecuador. He has done academic work and political analysis on Latin America, indigenous cosmopolitics and Podemos in Spain.

On Saturday 2 April a further session will be conducted, entitled Towards new democratic institutions. Systemic crisis and constituent power in Europe, with the participation of Sandro Mezzadra, a representative of the Democracy in Europe Movement – 2025 (DiEM25), Sergi Cutillas and a representative of Greece’s Popular Unity party. 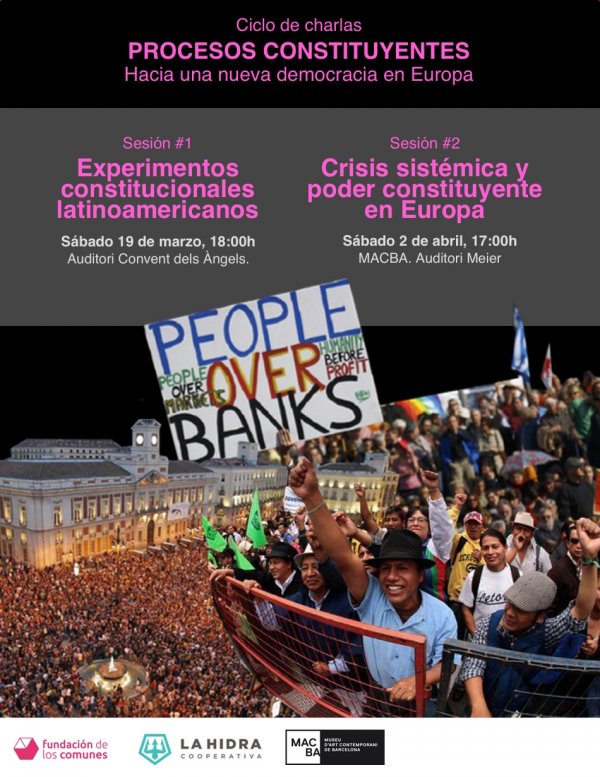 Constituent Processes. Towards a new democracy in Europe Materials for discussion from Latin America and the European political arena (session 2)
Lectures