Since the origin of the Carmen // Shakespeare project, dialogues between different audiovisual materials produced in parallel to stage experiences have allowed the creation of mixed heritage architecture between what would be the “arts of the body” and others which are more purely cinematographic.

In this sense, this work is framed within the various creations which are a product of the collaboration between Olga Mesa and Francisco Ruiz de Infante, a form that has proven to be particularly fertile, and which they generically call “film with holes”. In these strange times of early 2021, and not forgetting the social experiences of the confinements —in which imagination and human contact have been greatly disrupted by the use of “technologies”—, Olga and Francisco developed this “format”, trying to take the idea of constructing perceptive traps for the spectators one step further. For the MACBA Capella they have specially created a complex audiovisual and performative device with surprising intersections between the “now continuous”, necessarily captured in the past, from a film, and the “here and now” of a performance in which, inside the whirlwind of different dislocated hierarchies, float texts, movements, images and sounds —amplified or supressed by machines—, objects —represented and present—, authors, characters and even spectators.

Olga Mesa began her career in Spain but soon moved to Strasbourg, where she continues her search for the relationship between body and image. Her solo performances have been earning her international recognition since the 1990s. In 2005 she created the company Hors Champ / Fuera del Campo, and in 2010 was joined by Francisco Ruiz de Infante, a visual and technological artist who has done projects for museums such as the Reina Sofía, the Guggenheim and the Paris Museum of Modern Art. Together they invent a universe in which their artistic languages, their concerns and their respective experiences interact. 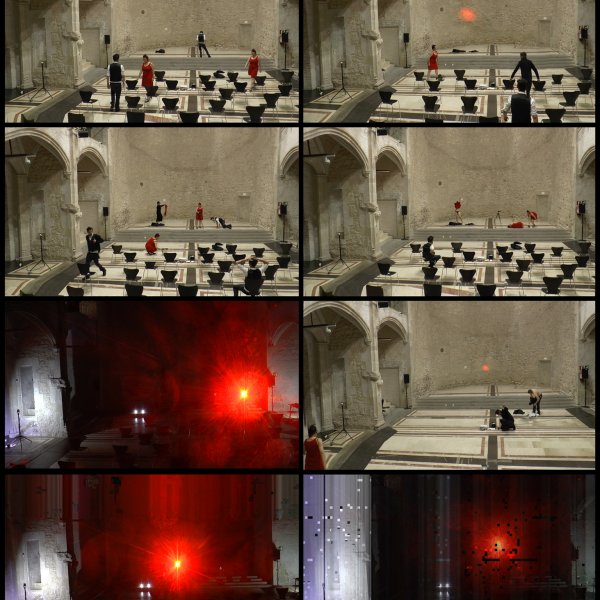 Booking
Share
Gold does not take on any dirt. And gold, just are diamonds, is an exalted material. It possesses such a degree of abstraction that it encounters you –if you use it artistically– on an already exalted level.
James Lee Byars