Let us remember with ruthless clarity how, in October 1967 in Sitges, Catalonia, an assembly of (practising or potential) film-makers laid bare the imposed political, expressive and democratic shortcomings of the cinema of the time - even when it was most committed to the struggle for democracy; how, in 1968, the Anti-Franco struggles intensified among us: and how 1969 began with a state of emergency. As if that were not enough, in the field of cinema, censorship worsened and the obstacles from the corporate unions (vertical unions = anti-democratic, remember) grew apace. As a result, many film-makers/auteurs threw in the towel having decided that the room for manoeuvre within the system was going from minimal to non-existent. So they would simply turn their backs on the laws of Franco's government. From then on, their films would be alegal, when they were not completely illegal; semi-clandestine when they were not completely clandestine, meaning that they – both films and film-makers – could at any time become victims of police harassment.

This protean, exciting movement was started in 1967, based around two axes. Firstly, the refutation of the formal, signifying and rhetorical mechanisms right across the whole range of formulae in the predominant, and conventionally industrial or commercial, cinema. The argument is that the struggle against Franco's (or the capitalist) system began in cultural (that is to say ideological) spheres by attacking the mechanisms of communication and consumption: and from that perspective the choice of elements of reference was not decisive. The second axis was that which ensured that all anti-Franco political activity should be steeped in reality, thereby recuperating and restoring – for the viewer - the growing popular struggles taking place, making the arguments more immediately readable, leaving "formalist" experimentation for a less urgently needful time. An old debate, then. Obviously, on more than one occasion, the two axes became one.

This movement, which, by the 70s, was breaking down into the "Cine de la Transicion" group (which owes no small part of its richness to the movement) is documented, through representative cases, by the films shown during this season.

About the film: "Viaje a la explotación"

“Drawing on the life experience of a Moroccan emigrant, Mustapha – if one can talk of life experiences when describing the series of misfortunes that befall him following a work accident, the film presents the latent discrimination and racism that exists in our society. Since 1969, when many thousands of Spanish workers had already emigrated, Algerians and Moroccans have been arriving and heading for our most industrialised cities, the places that have most need of unskilled labour, like Barcelona… Despite the growing unemployment that already existed… capitalism used these North-African immigrants principally in the construction sector, a sector that is perfectly suited to the most blatant forms of exploitation… With no chance of demanding their rights, unorganised, without any contact with their Spanish colleagues (mainly because of the language difficulties), with no health insurance, isolated in authentic ghettos… These are the co-ordinates on which the film has been based, a true social document that fits fully within the tenets that the alternative cinema proposes…”

This session will show films that reject outright any commercial or industrial-institutional format, including the ‘anti-cinema’ of Aguirre or the works connected with conceptual art by Santos and Portabella and an (anti)documentary by Antonio Artro that comes close to situationism. Other films include: the markedly anti-Franco Aidez l'Espagne (Help Spain); a penetrating and experimental reflection on restless unease (Ana); a radical naturalist adaptation of a tale by Buñuel, Una historia decente (A decent story); and, from 1972, a disturbing proto-surrealist reflection by Padrós on the tensions within couples, and within the culture.

In 1968, the Barcelona School filmmaker José María Nunes, filmed Sexperiencias, a feature-length film about the complex webs woven together by political struggle and amorous desire. The reaction of the administration was to hurl the film into the void of official non-existence, condemning it to clandestine diffusion. At the same time Llorenç Soler was filming Largo viaje hacia la ira (The Long Journey into Rage), a disquieting work dealing with immigration, slum-living and the shanty-towns in the Barcelona of the time of desarrollismo - the rapid and uncontrolled development of the city. The film was able, however, to count on the financial support of a certain institution disposed to cover itself with a coating of democratic liberalism.

At the beginning of 1970 a small group of young filmmakers appeared in Valencia, a group whose existence was to be short-lived – just three or four years – and which was characterised by the modernity of their conceptions and the originality of the solutions they adopted. Drawing on the support of a business structure that worked in the production of publicity films, and situating themselves in the theoretical shadow offered by Marxism, Situationism or Semiotics, these filmmakers wove together fiction, documentary effects and “montage films” with a stimulating and youthful ease.

The members of the Cine Club Universitario in Bilbao set up a production group in 1970 that during its three long years of life displayed an attractive, though uneven, effervescence. Javier Rebollo, in María, confronts us with the everyday misery of an adolescent, while Salitre (Saltpetre) by Rebollo, and Brindis en la huerta (A Toast in the Allotment), by Ortuoste, deal with the couple as an asphyxiating and self-destructive structure. A work with a very different purpose is Bi, by José Julián Bakedano, a film that sets the dynamism of abstract forms against that of two characters from an old American comedy film. The musician José María Zabala offers us an unusual feature film in which by weaving together poetry, painting and music he warns us against a horizon of repression and sadness.

The Colectivo de Cine de Madrid (Madrid Cinema Collective) (1971-1978) was created with the aim of filming all kinds of events in order to make a documentary record, from a militant anti-Franco perspective, of the journey towards the restoration of democracy. University 71-72 and Vitoria form part of what was then known as the ‘militant’ or ‘counter-information cinema’ which was at a highpoint at that moment. This is demonstrated by the film A José Luis Cano, dedicated to him and to all those killed during the struggle for amnesty, in which Avizanda depicts one of the last moments of anti-democratic Spain. Similarly, Can Serra by the Cooperativa de Cinema Alternatiu (the Alternative Cinema Co-operative) offers a detailed view of a series of political problems of the time.

This session offers glimpses of the different faces of what was known as the ‘independent cinema’. Films that were always in an ambiguous situation with respect to the law, such as Pelicula sin nombre (The Film with No Name), Largo viaje hacia la ira or Un libro es un arma (A Book is a Weapon) occupied the space of counter-information or documentary film. Others, such as Torera (The Woman Bullfighter) or A la vuelta del grito (When the Scream Comes Back) tended more, formally speaking, towards experimentalism.

This programme brings together different films from the period 1976-1978. The depiction of the strike in O todos o ninguno (All or None) alternates modernist touches with very varied contributions and information from the people who were actors in the conflict. 628-3133 Buffalo Minessota is a playful and hypnotic cross between conceptual art and references to Wawelenhg by Michel Snow. The Cooperativa de Cinema Alternatiu shows one of its monthly newsreels of which it was only possible to produce three editions, each of which dealt with a single issue. Finally, there is the apparently humble Resumen de noticias (News Headlines), in reality an exceptional document about the bloody Sanfermines (the Pamplona bull-running festival) of 1978 and the strategy of provocation, by those favouring a coup d’état, that fuelled the tension surrounding the event.

El sopar (The Supper) set out, in the form of ‘television counter-programming’, to establish a series of representative benchmarks, stipulations for an immediate political future that would meet the needs of democracy. On the other hand, Cada-ver-es (a play on words ‘Every-Look-Is’/’Corpses’) constitutes the most unassimilable cinema experience of this period, with its radical and eccentric nature in which terror, poetry and alienation are set alongside each other.

Participants, starting from the avant-garde territory that is rightly theirs, maintaining here the conventional distinction between the artistic and political vanguards, tend to slide towards the complementary territory. Thus, the hardened underground artist Antoni Padrós belongs not just to the artistic avant-garde. Similarly, Mariano Lisa of the Colectivo de Cine de Clase (Cinema of Class Collective) transcends the political avant-garde, as happens, though in a more cautious way, with the heterogeneous works of J.M. Martí Rom of the Cooperativa de Cinema Alternatiu, whilst Pere Portabella moves with unexpected aplomb within both fields. 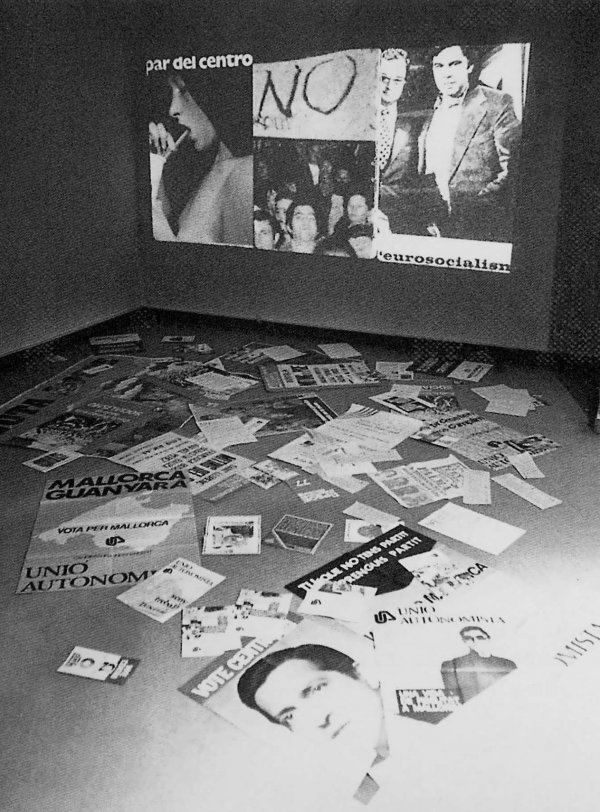