By the late 1950s, Guy Debord made a radical avant garde film called Hurlement en Faveur de Sade in which a series of black screens, along with some commentary, announced the end of visual naivety. Debordís movie was a form of visual suicide, a radical critique of the image perceived as being not only totally uncritical, but also always subservient to ideological manipulation. That is why Debord used the humorous phrase: Le cinema est mort, passons directement a la discussion. The word followed by action was supposed to replace the image followed by inaction or contemplation.

But this was the extreme avant garde position. Western culture at large was, on the contrary, launching an all out visual offensive in the context of a Cold War, defining each sphere of the everyday, from politics to consumerism. Cinema became in this context a hotly debated field where films were participating in a powerful ideological fight. That is why, right after the war, cinema was part of an intense battle between Hollywood interests who wants to disseminate the American Way of Life across the western world and France, who hoped to preserve, without success, her old tradition of French quality in a revamped post-war industry. This split became visible in 1946 during the discussion of the Blum-Byrnes accord, which revealed the importance given by the Americans to culture in its fight against communism. The French who wanted to have quotas to preserve their industry where unable to do so under the pressure of economic necessity; this was part of a program, which would later become known as the Marshall Plan.

The series of films selected in this exhibition aims to display the complex interaction between popular filmic expression in both countries at a time of radical cultural transformation and political danger. Films continued their tradition of social commentary but this time under a somewhat heavier framework. Both France and the U.S. in their best cinematographic productions were trying to define their specific new post-war culture while simultaneously proposing it as a general model for western culture. That is the reason why the critical debate in painting and in film became so heated and why in some circles US images became sign of modernity while for others sign of reaction.

Liberation of France: Between the shame of the past and a marvelous future
Thanks to his collaboration with the poet Jacques Prevert, Marcel Carne manages to renew with his pre-war manner and to represent France using his well known Popular Front poetical realism to show a decisively positive and intimate side of the Parisian popular life.
But the old positive poetic of the present is here transformed into a darker atmosphere after the discovery that the Amour Fou of years passed has now become impossible in a post-war world not only full of guilt and remorse about collaboration but also because the contemporary economic situation does not allow any idealistic alternative. Sweet memories of times passed is what the young Yves Montand is singing in the famous song written by Joseph Cosma, Les Feuilles mortes se ramassent à la pelle. Contrary to this grim poetic assessment, Cocteau proposes a way out, even a far out one with his highly poetic and symbolic Orpheé. Cocteau, depicting the new bohemian world of the Parisian Quartier Latin, manages through poetry to give hope a chance even if it might be in another world.

Mythical Bohemia
Two films about bohemian life in Paris in the immediate post-war period. Both films describe the intellectual environment offered by the Quartier Latin to a young generation of artists. Becker's is full of new Wave energy in the depiction of a new youth culture of misfits while Brooks proposes, in a complementary way, a Hollywood version loosely adapted from a Scott Fitzgerald novel imbued with the powerful Parisian artistic myth still in place until the late 1950ís.

Fearing the Other
These two films, in opposite ways, talk about typical American cold war fears. Fear not only of foreign invasion and Atomic attacks but also the paranoia of being constantly confronted with unknown and invisible threats. Hitchcock's film mixes in a wonderful way, notions of curiosity, voyeurism and surveillance, spying on neighbors and intrigue using cinematic language to alert viewers about a loss of independence. This is the independence that the hero James Stewart, stuck in a wheel chair after a small accident and newly wed begins to realize he has lost while at the same time he notices threat in the world of the everyday. Through the quiet desperation shown by the hero, the film is a critique of the importance given to the family during the Eisenhower era as well as a clear statement about a big brother society. Kiss me Deadly, on the other hand, is without too much subtlety, apocalyptic and nihilistic but fun as well in its overdone science fiction discourse which talks about atomic annihilation. The film, drawn from Mickey Spillane's best seller pulp fiction book, is full of very authoritarian scenes where the vigilante Mick Hammer discovers the low life of gangsters and femmes fatales in a vast series of frescoes describing an intense atmosphere of helplessness.

Consumerism and the Self
Consumerism brought very different and conflictual situations in the West. What is reflected in these three movies is the way each culture dealt with its pressures. Rebel without a Cause presents the dilemma confronting the new family whose parents came out of the depression but were now wondering how to react to the multiple demands of an affluent but nevertheless frustrated and restless generation of teens. Unprepared for this upheaval, the American family falls apart, due, according to the film, to the inadequacies of the traditional father figure. A cult film because of the death of James Dean, it violently and often unknowingly, shows the underbelly, the other side, of the bright advertised consumerist culture. This is a culture of young people confused but sexier, more feminine, more confused than their parents. Brigitte Bardot, on the other hand, symbolized not only pure sexual attraction for men, but also a strong individualistic feminine personality. The period was ripe for the liberation of the female, at least her sexual liberation, as Simone de Beauvoir immediately recognized. This was the time of self-direction, of individual freedom, uncluttered by traditions, by taboos or paternalistic and religious rules as Francoise Sagan was also scandalously arguing in her writing. While Charles De Gaulle was attempting to recreate France, Jacques Tati, with great hilarity, presented the dangerous flaws of modernity concentrating on rather exaggerated signs of this new developing but superficial society from an ironic and humoristic perspective. He made people laugh about their own desires for modernization at all costs.

Looking Back
These two films look back with great intelligence at the period covered by this exhibition. Hidden Hands is a documentary based on interviews with C.I.A. operatives who explain the high stakes surrounding the production of high art in the fight against communism. The CIA, understanding the high stakes of culture at a time of high political tension, astutely defended an art of individual modern expressionism despite a strong rejection by traditionalists and conservatives. The film reveals the many different ways the State Department helped some museums and literary reviews (in the U.S. but also in The U.K., France and Germany among others) in order to present in a positive and highly sophisticated light on U.S. culture faced with Soviet cultural propaganda. George Clooney's very sensitive and beautiful film shows the implications of the Cold War and McCarthyism on democracy and the press in the U.S. at a time when very disturbing signs of mind control were becoming very significant and visible. 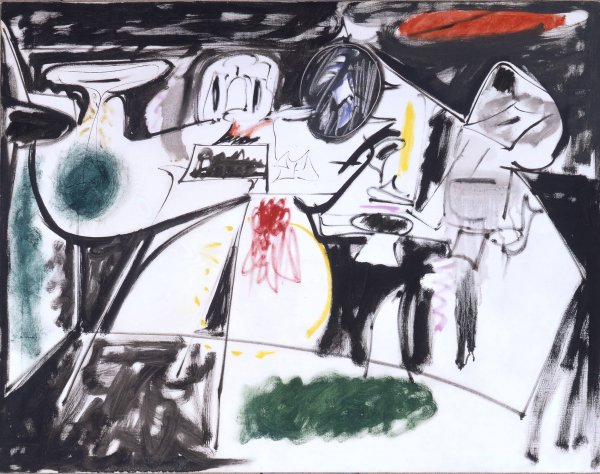