Audioscreen MACBA brings together three projects presenting new relations between image and sound. In the current technological and cultural context, they recover the experimental tradition around multisensory creation. On this occasion the programme transcends the two-dimensionality of the screen and reproduces the spatial and audiovisual codification of the disco, a key contemporary musical device and one of the main relational spaces of late capitalism. Guest performers this year are Roc Jiménez de Cisneros, Mark Fell and Lorenzo Senni, three artists who base their work on the deconstruction and reconfiguration of the sounds of electronic dance music of the last two decades.

The continuity and interdependence of sound and visual elements and the displacement of reception from the ear to the entire body are two of the main characteristics of discos. We are dealing with a ‘post-scenographic’ sign space that activates and is activated by the actions of the body. By incorporating various disco elements, such as laser rays, colour and/or stroboscopic lights and smoke, the programme seeks to encourage the corporality of the viewers and their performative dimension, while exploring the interaction between the public and the audiovisual continuum. 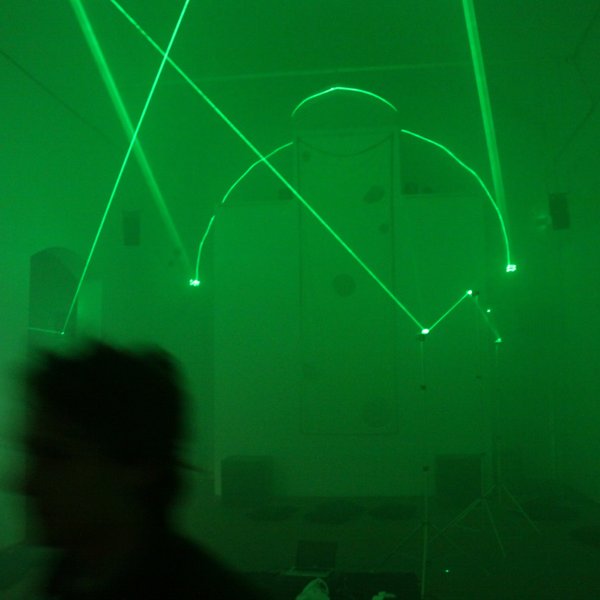 SATURDAY 1 JUNE, 10 pm
EVOL
Roc Jiménez de Cisneros and Stephen Sharp (EVOL) produce what they call ‘computer music for hooligans’. Their work may be seen as an aesthetic exploration of algorithmic compositions and a deconstruction of rave culture. Their recordings, installations and live performances propose a radical conception and a playful approximation to the synthesis of sound, full of ascendant spirals and indecipherable temporal structures half way between psychedelia and academia. Their new album, Proper Headshrinker, has recently been released by Editions Mega.

SATURDAY 8 JUNE, 10 pm
Mark Fell
Mark Fell is, together with Mat Steel, the co-author of SND, one of the most important creative cells of the ‘clicks n’ cuts’ scene. Fell’s solo work is based on a re-reading of the language of dance music from the nineties through different experimental uses of technology. His work combines such diverse techniques as computation and sound synthesis with the study of perception and phenomenology, something that has turned him into one of the most interesting and daring audiovisual creators on the international scene.

SUNDAY 16 JUNE, 10 pm
Lorenzo Senni presents Oracle
Lorenzo Senni is an unclassifiable creator who bases many of his productions on the appropriation and re-reading of the sound and visual background of rave culture. His latest work, Quantum Jelly, released by Editions Mego, is a good example of the originality, dynamism and overwhelming intensity of this musical trend. To present his music live, the Italian musician has developed a sophisticated staging, incorporating laser rays and other visual elements from the rave world.

This concert forms part of the closing night of Sónar and is organised in conjunction with CCCB, where the concert Max Richter + BCN216: Four Seasons Recomposed will take place at 8 pm.

Concert 1 June: 7 €
Concert 8 June: 7 €
If you buy tickets for both days (1 and 8 June), you will get 50% discount for the second concert by simply introducing the 'MACBA' promotional code at the time of purchase. To validate the discount you must present the tickets for both sessions at the box office.

Concerts 16 June
The concert scheduled for Sunday 16 June forms part of the closing night of Sónar and is organised in conjunction with the concert at CCCB (Max Richter + BCN216: Four Seasons Recomposed) at 8 pm. Combined tickets as well as single-concert tickets are available.

Senni Lorenzo’s Oracle concert at MACBA: 10 € (standard) and 7 € (Friends of MACBA and the CCCB)

Combined ticket to CCCB-MACBA: 20 € (standard) and 15 € (Friends of MACBA and the CCCB)
You can only purchase this ticket by calling Telentrades 902 10 12 12 and the ticket office at CCCB.

Advance booking by telentrada and from the ticket office of each venue one hour prior to the start of each concert.

Atrium of the Museum. Limited places

COMPOSING WITH PROCESS: PERSPECTIVES ON GENERATIVE AND SYSTEMS MUSIC #9.1 Two Discrete Generative Systems
06.06.2013
I don’t think about art when I’m working. I try to think about life
Jean-Michel Basquiat