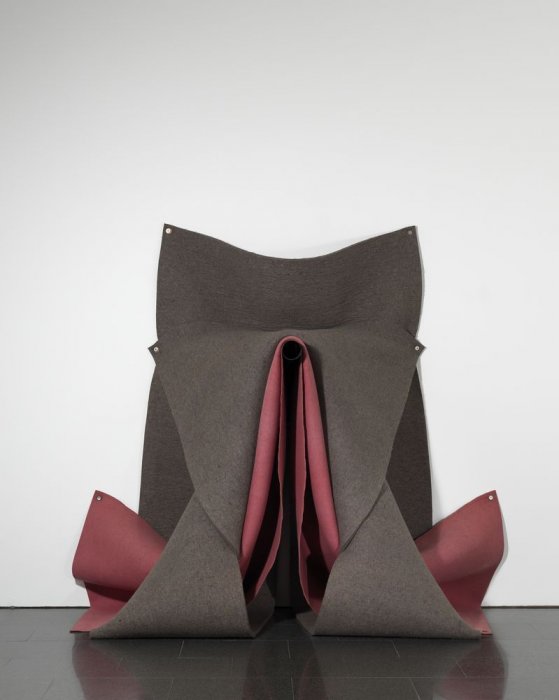 House of Vetti is a series of felt works by one of the great exponents of American minimalism, Robert Morris. In the early sixties, this new sculptural practice turned its back on traditional noble materials such as bronze and marble in favour of common and industrial elements. Robert Morris contributed to minimalist language through pure geometric forms. His first ‘unitary forms’ date from 1961, when he began to experiment with visual perception in works based on polyhedrons and industrial materials, often in monochromatic grey. This strict minimalism gradually veered towards what Morris himself called ‘anti-form’, a new way of experimenting with volumes that led him to produce accumulations of things, some earthworks and series of pieces made from felt, a ductile material that he used for the first time in 1967.

Over time, Morris began to make increasingly complex compositions using different coloured felt within a single artwork. House of Vetti, which dates from 1983, is one of his most significant series. In these works, Morris uses thick panels of pink and grey felt and makes cuts in them. He then hangs them from the wall, letting the weight of the flexible material create a random form imposed by gravity. Without any pre-existing plan, Morris creates a series of forms that allow him to discover the specific solutions that are appropriate in each case, so that working with felt becomes a way of experimenting with its expressive potential.

From the point of view of Gestalt theory, which sees the perception of shapes as part of an overall structure, the felt works focus attention on the production process. The amorphous quality that the fabric ends up adopting – which inspired the name ‘anti-form’ – brings to mind certain cultural forms that the human mind tends to organise as sets or gestalts. In this case, House of Vetti suggests drawings of clothing in the classical period, and also the female genitals. The title comes from the House of Vetti, a luxury Roman residence in Pompeii that is decorated with mural paintings dedicated to Priapus, the god of fertility. But Morris combines references to eroticism with a complex theory of form based on the opposition between the notions of the whole and its division into parts. A comparison that also becomes a symbol of two basic human impulses according to Freudian theory: Eros and Thanatos. While Freud saw Eros as the attempt to order the chaos of experience, and Thanatos as the drive to destruction, Morris allows entropy – in this case the force of gravity – to define a geometric form.

Other works by Robert Morris