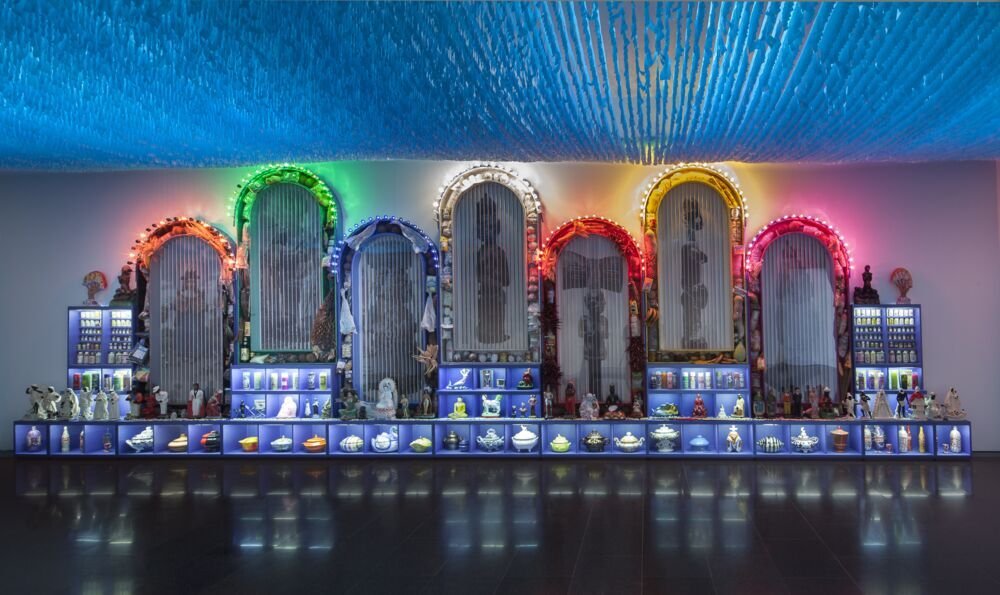 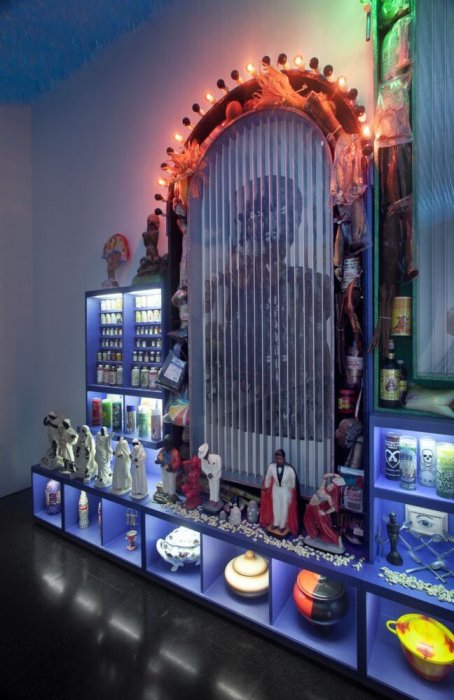 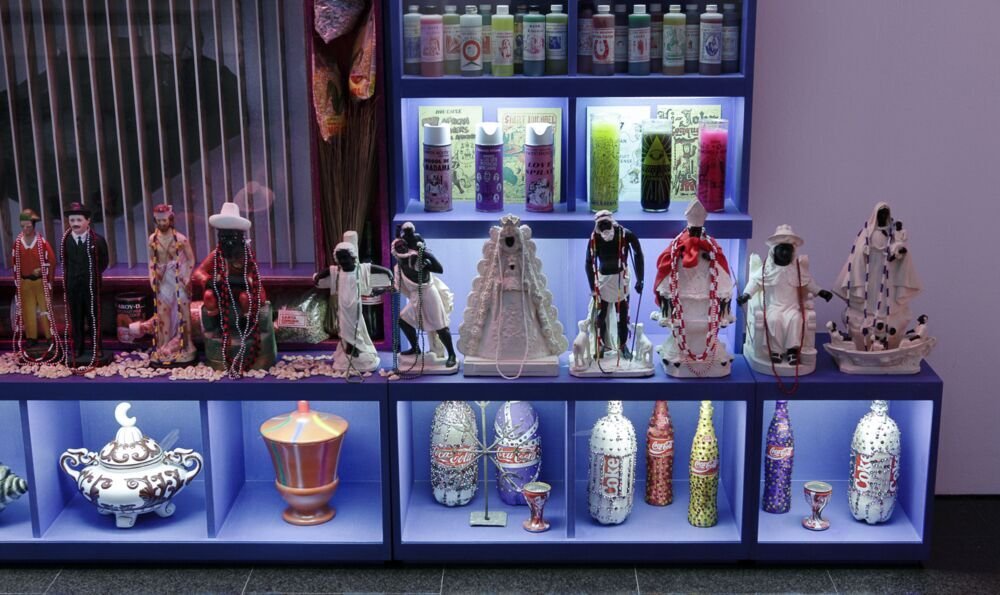 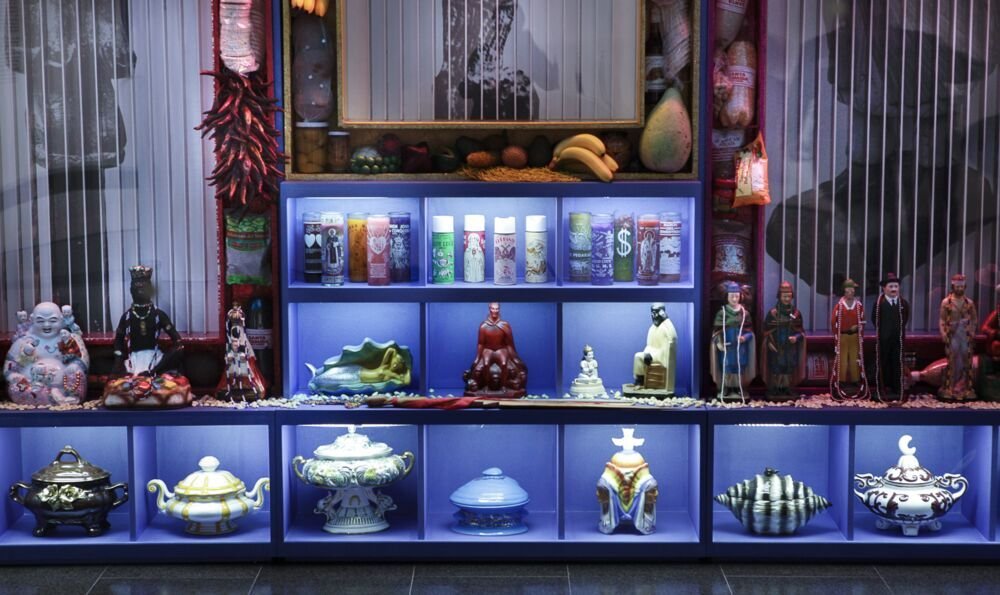 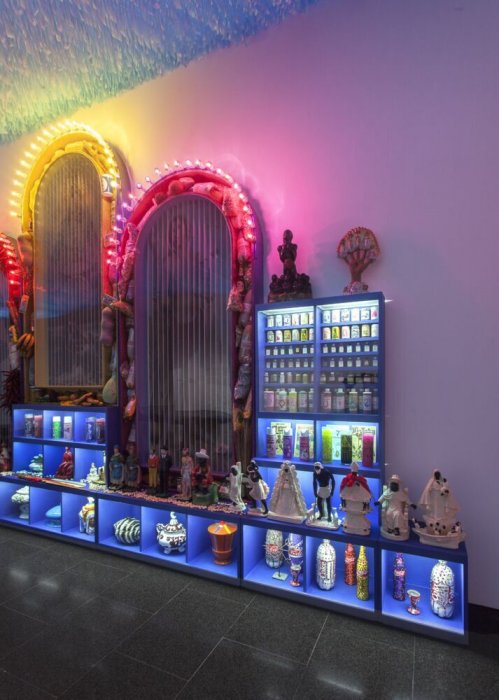 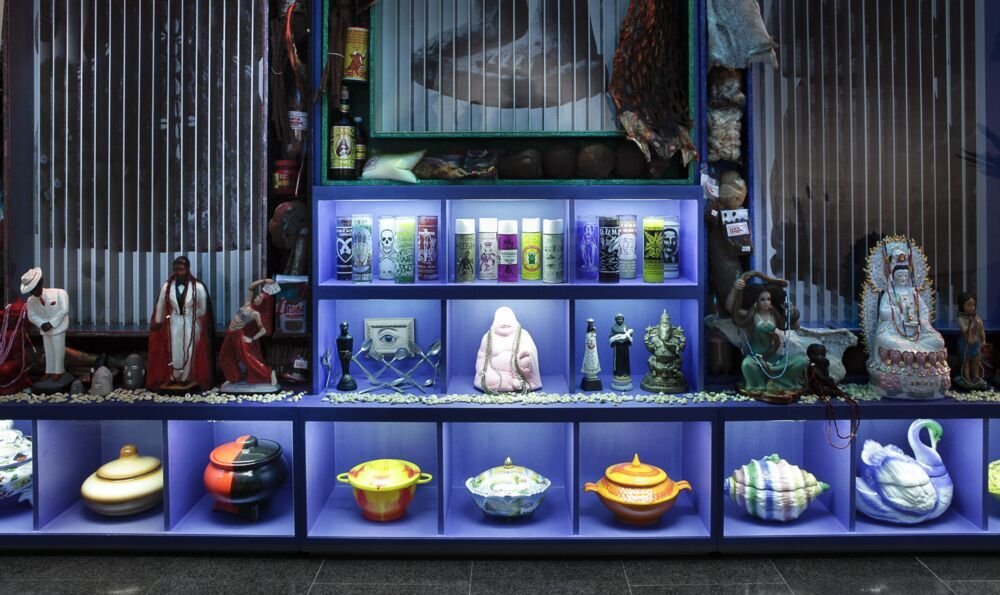 You will find all the details of Santa Comida (Holy Food) by clicking here to pop up the content. Digital publication recommended for mobile devices.

With multidisciplinary work between happening and participatory installation, Miralda has made eating his creative axis. A universal activity, yet so particular to the various human groups, it is used by the artist to carry out a political critique and an ethnological deconstruction of prejudices and schemes in a global world. Using kitsch iconography and Baroque aesthetics in large works, he commits to a vital language that celebrates the senses, colours, party, play, imagination and life. As Umberto Eco wrote in 1985: ‘Miralda travels the whole world to recreate the old ritual of celebration.’

Holy Food is an installation of multiple elements that reflects on the transfer of cultures from one place on the planet to another. The work refers to Afro-Caribbean culture and focuses especially on the cultural legacy of African slaves that formed some of the popular subcultures in America today. As the title indicates, Holy Food is food offered to the Orisha deities, gods of the Yoruba region in Africa that exemplify transcultural survival after their arrival in America. Originating from the Gulf of Benin on the coast of West Africa, Yoruba culture has kept its beliefs over the several generations that came to Cuba, Brazil, Haiti, Puerto Rico, Central America and the United States, through assimilation with Catholic saints. It is a phenomenon of extreme syncretism that is the origin of Santería. Cuisine and religion come together in the daily life of the Yoruba to the point that much of their survival as a culture is due to their ritual around food: a festive ritual in which they offer each Orisha god the foods corresponding to their individual attributes.

Holy Food consists of seven holy altars dedicated to the most prominent Orisha deities. As the viewer moves around the installation, every altar reveals an image of a Yoruba deity and its equivalents in Christian worship. A number of foods and food products linked to the Yoruba gods frame the altars: Osun eats boiled sweet potato, fried bream, cakes and pineapple; Babalu Aye eats cooked quail, sugar cane, peanuts and coconut milk; and so on for all seven deities. A colour for every altar reinforces the link established with the various gods, while maintaining the colourful and sensorial elements of Miralda’s work. The artist awarded the god Eleggua the colours red and black; Oggun green; Yemaya blue; Obatala white; Shango red; Osun yellow; Babalu Aye pink. The installation is completed by soup tureens, objects wherein the Yoruba usually keep stones as a symbol of the strength and spirit of the gods, and other utensils and religious imagery related to the rituals of Santería. Finally, the work is accompanied by the song Angelitos negros (Black Angels), which in its bolero version made famous by Antonio Machín became a hymn against racial discrimination.
Holy Food was first presented in 1984 at the Museo del Barrio in New York. Its director, John Mason, founder of the Yoruba Society of that city, collaborated with Miralda in his research and facilitated the interaction of the Latino community of Spanish Harlem with the installation. In the publication accompanying the exhibition, Mason wrote: ‘Between 1500 and 1865, about twelve million African slaves came to Cuba and Brazil, mostly from the West Coast. [...] Shango (god of fire and warrior king) is transculturalized into Saint Barbara; Obatala (primordial creator) into Our Lady of Mercy; Oggun (architect of civilization) into Saint John the Baptist and Saint George.' 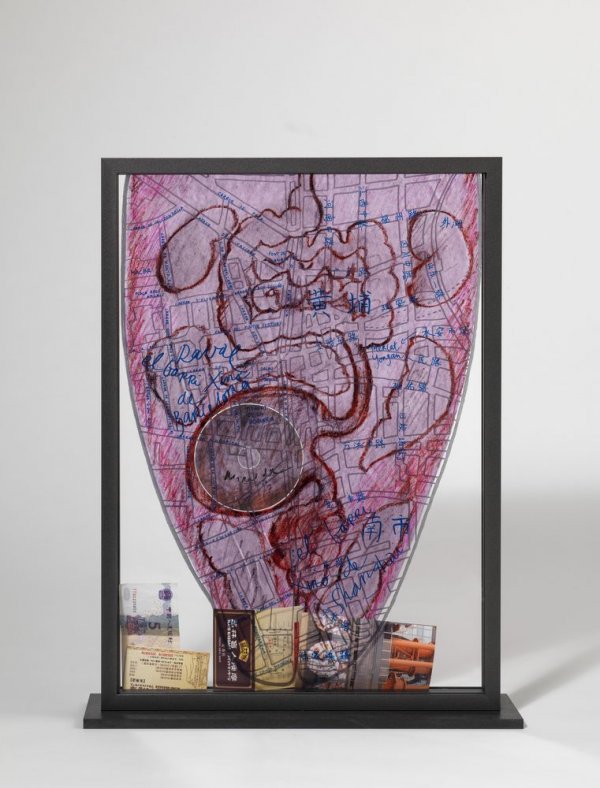 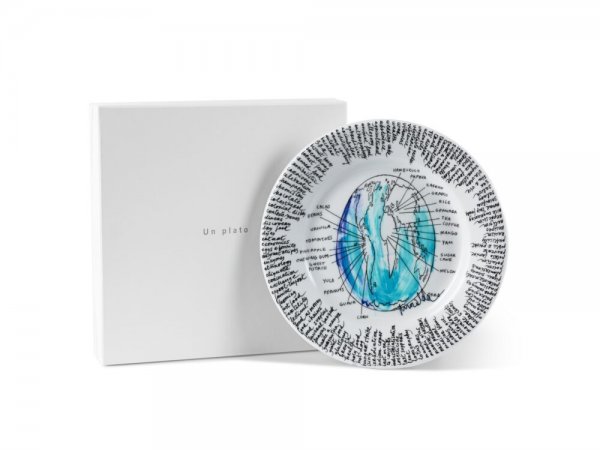 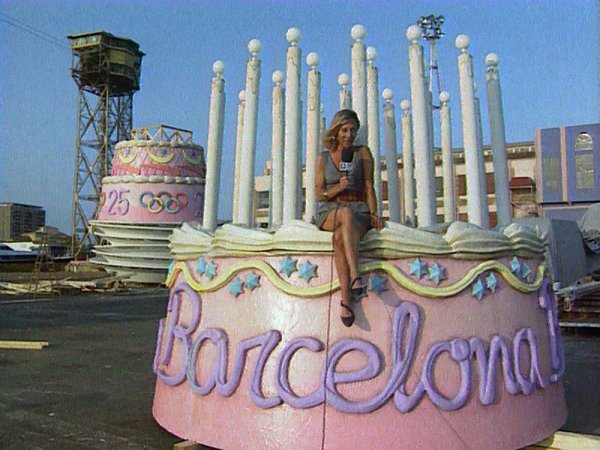 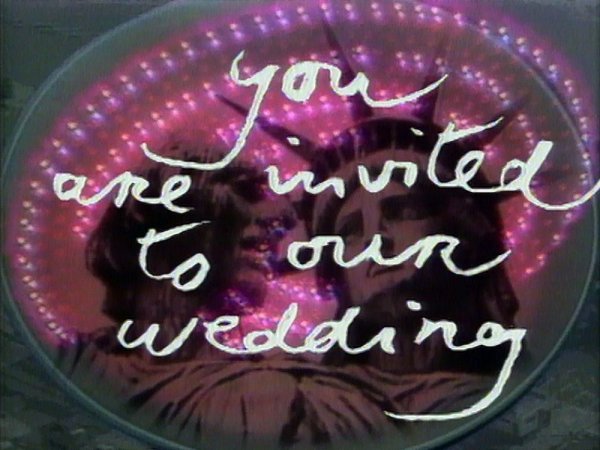 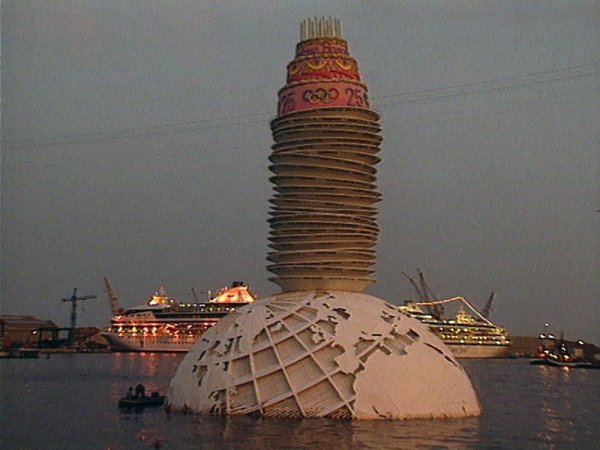 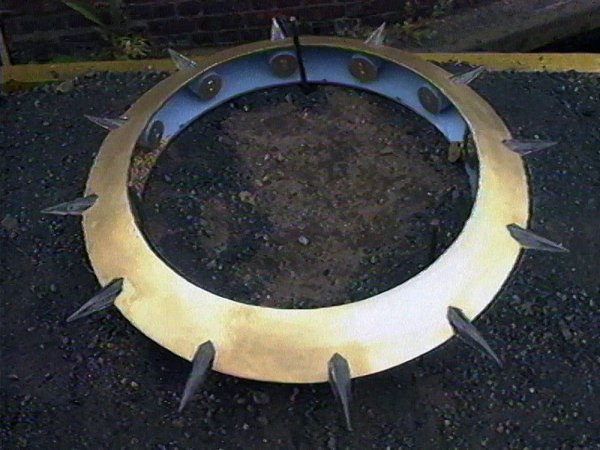 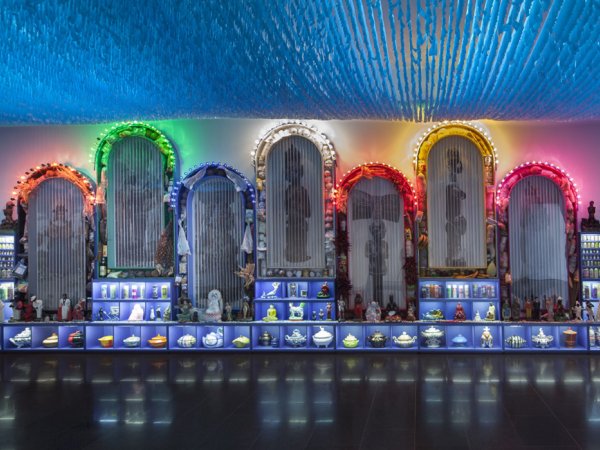 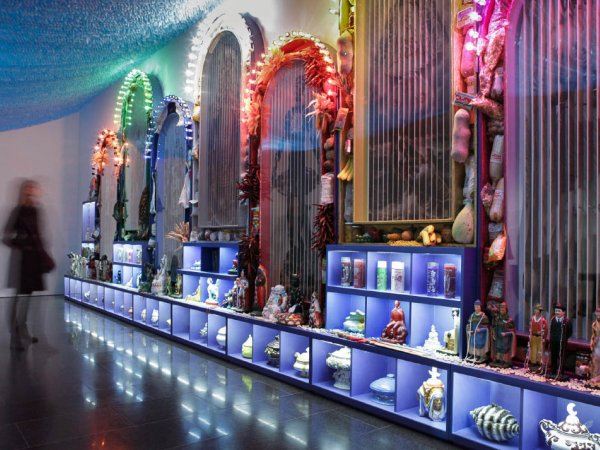 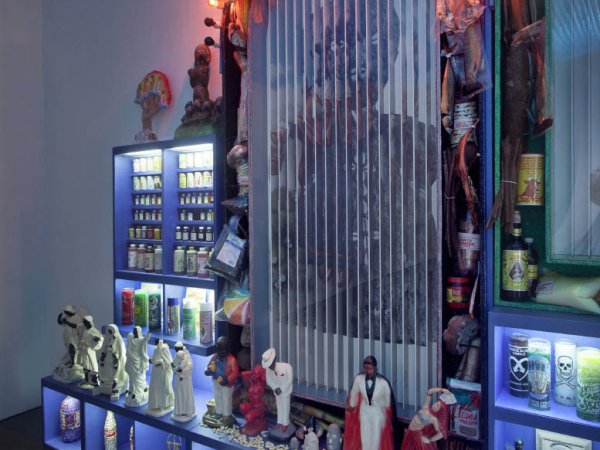 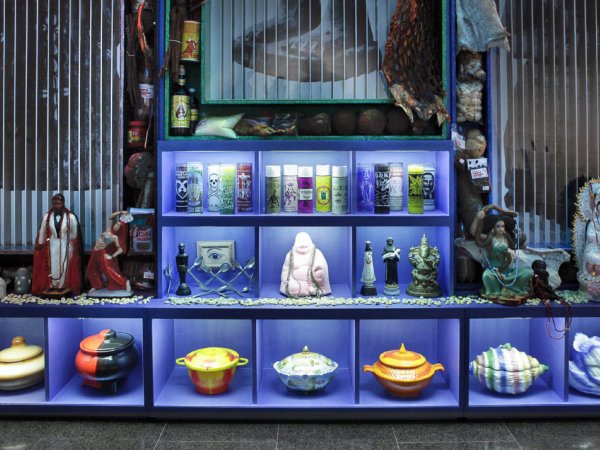 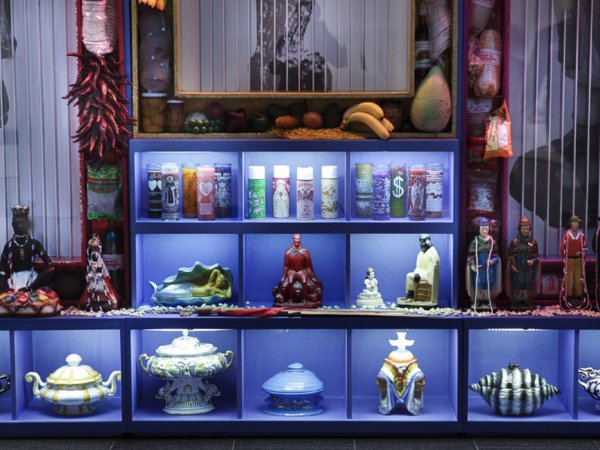 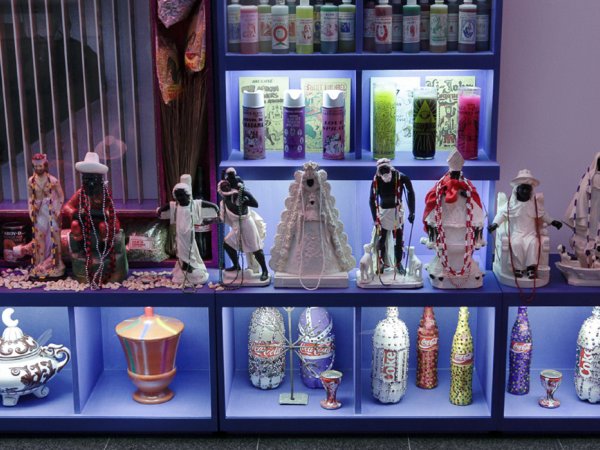 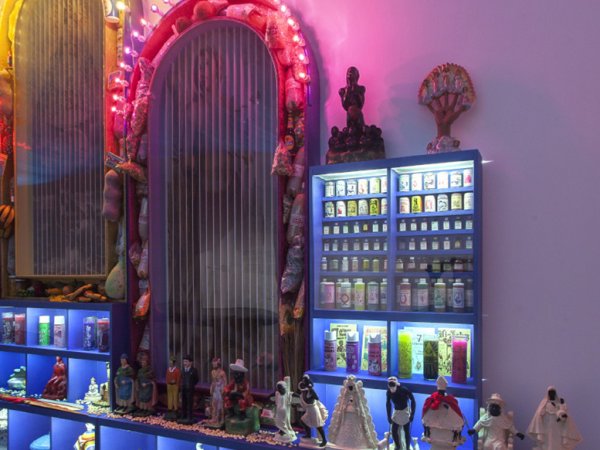 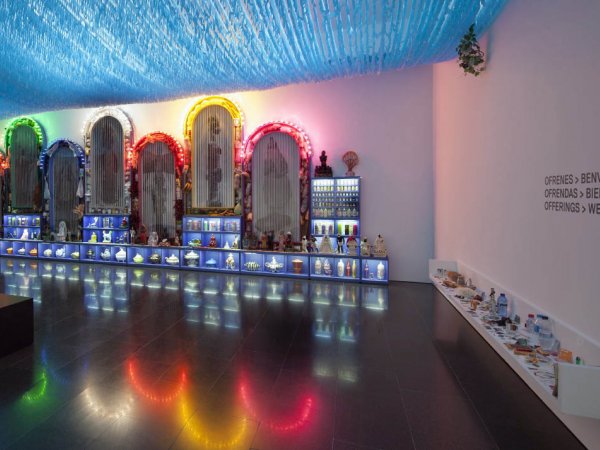 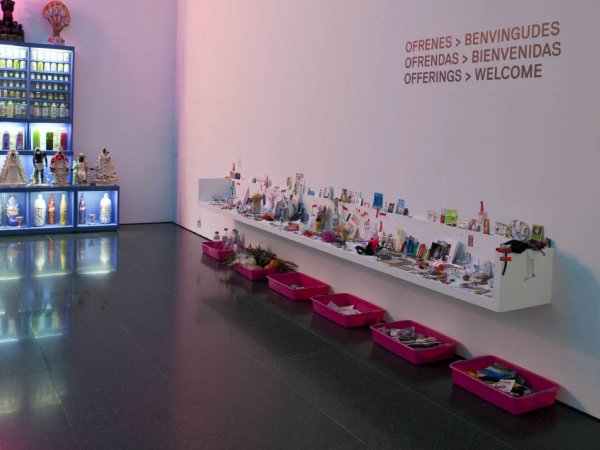 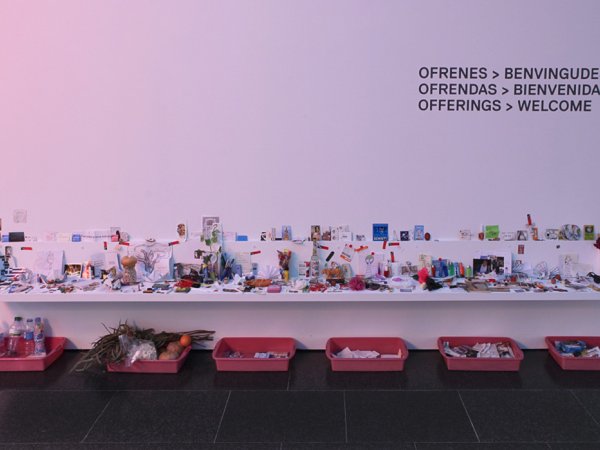 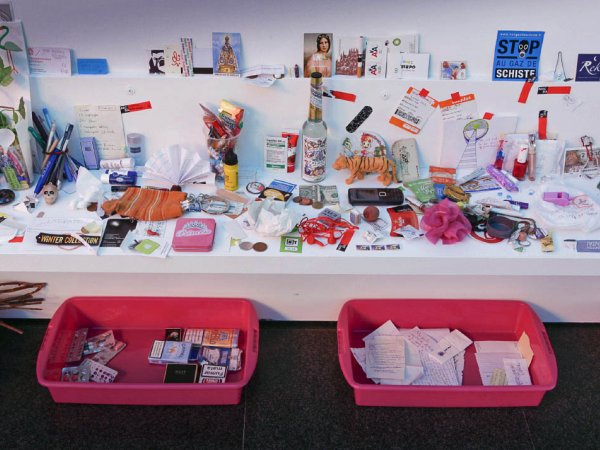