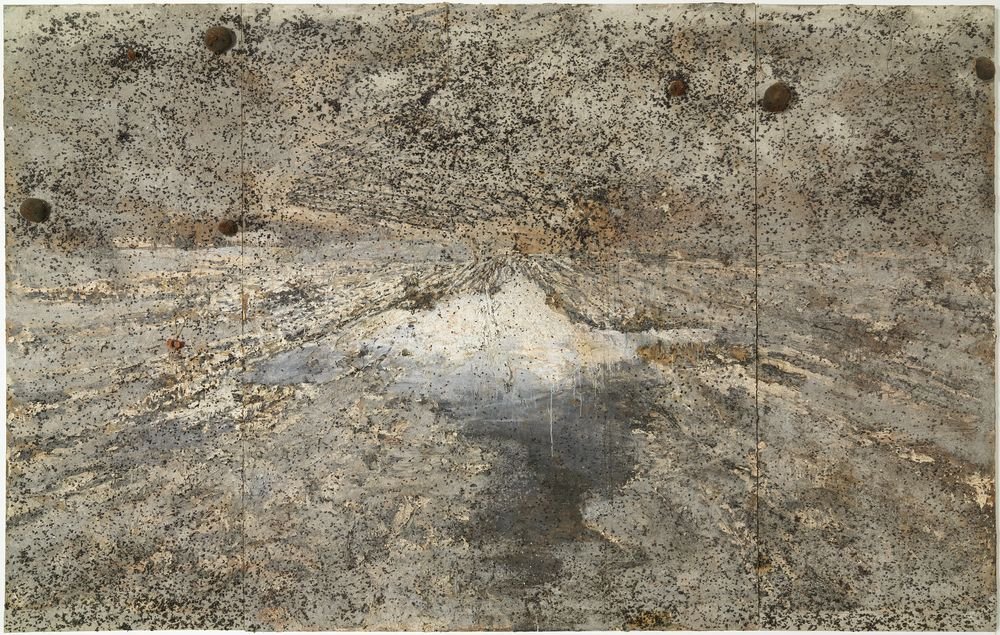 Anselm Kiefer was born in Germany in 1945. He studied Law and
French at the University of Freiburg, later studying at the
Art Academy in both Freiburg and Karlsruhe. His birth year,
1945, marks the end of World War II, placing him within a
generation of post-war Germans who have inherited the legacy
of fascism and face the cultural negotiation of memory and
German national identity. In this regard, his work must be
contextualized in terms of Theodor Adorno’s 1949 statement and
its reception: "After Auschwitz, to write poetry is barbaric."
In the early 1970s Kiefer studied informally with the artist
Joseph Beuys; yet unlike his teacher, he did not live the
primary experience of the historical trauma of the Holocaust.
Kiefer's photography, painting, and sculpture exemplify the
dilemma of image, the inaccessibility and impossibility of
historical representation, as he persistently probes the
aesthetic and ethical concerns of a visual practice that
problematizes "how to represent the unrepresentable" of German
history. The mytho-poetic and melancholic atmosphere of his
work are traces of a process in which he simultaneously asks
what it means to paint and what it means to be German in a
post-Holocaust Germany. [1] His expressionistic pictorial
vocabulary often aligns him with the "New Savages," a term
coined by the art historian Wolfgang Becker and used to
describe the work of German artists such as Georg Baselitz, A.
R. Penk, and Markus Lüpertz.
This large format triptych Montsalvat, produced between
1981-1994, transforms the flat surface of modernist
abstraction into a space that combines and creates a
topography of materials that includes sand, sunflowers,
sunflower seeds, and string. Like many of Kiefer’s works that
draw on myths of the Kabala, Alchemy and Germanic legends,
Montsalvat of the Holy Grail refers to the legend of this
sacred object. The Holy Grail was a symbol of faith in the
middle ages and its legendary search was taken up and
elaborated in the 12th century by writers such as Wolfram von
Eschembach in his book Parzifal. Kiefer’s painting is an
exploration of how mythical images work and probes how myth
becomes history and history becomes myth. The painting also
incorporates a preoccupation with time through the
incorporation of nature’s changes — dried sunflowers — into
the creative process.
[1] Lisa Saltzman. Anselm Kiefer and Art After Auschwitz (New
York and Cambridge, UK: Cambridge University Press, 1999), pp.
1-16.

Other works by Anselm Kiefer 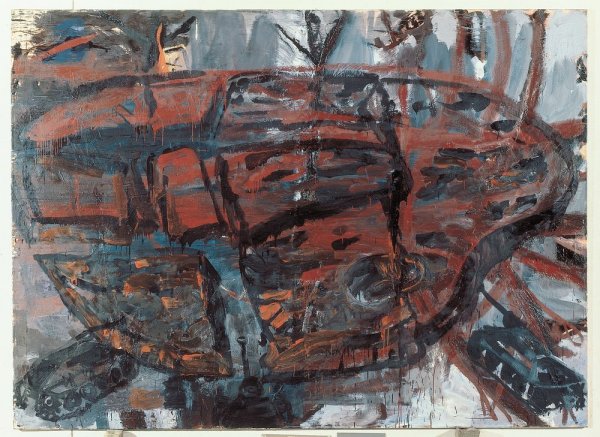 Anselm Kiefer
Bilderstreit
1978
See all works by this artist →
I’d really like to think that the artist could be just another kind of material in the picture, working in collaboration with all the other materials.
Robert Rauschenberg