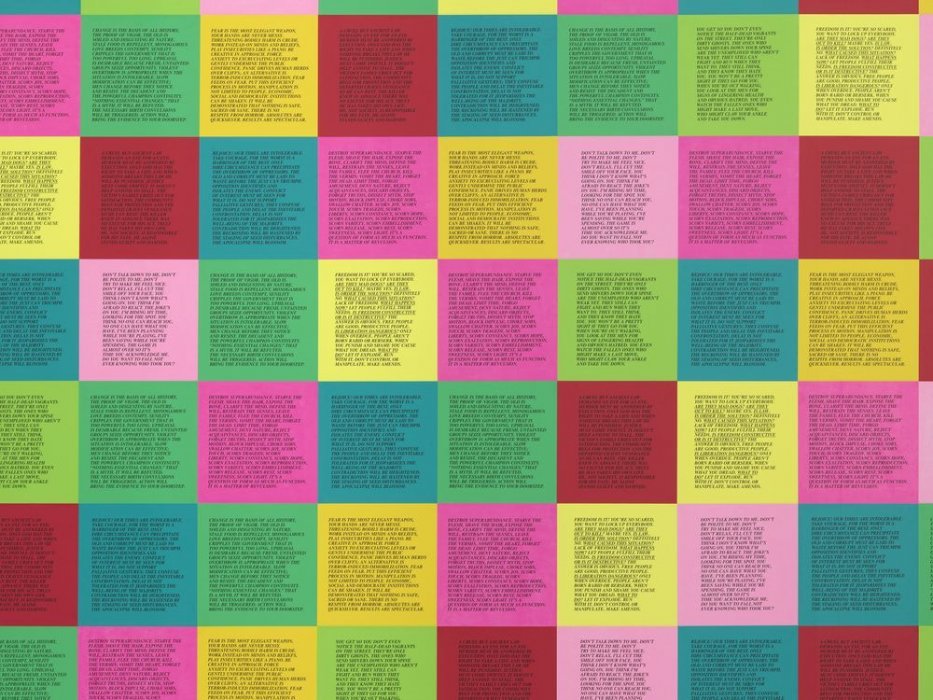 Convinced that art resides in the concepts it sets out to communicate and not the form of the artistic object, Jenny Holzer has turned language into her creative material. Her first incursions into this field were her famous Truisms. Under this name, in 1977 Holzer began to hang posters in the streets of SoHo and other parts of Manhattan with incisive messages on social contradictions, sexuality, violence and the abusive logic of power. Arranged in alphabetic order and in black capital letters on a white background, she uses them ‘to keep people awake’ , as the artist explains in an interview.

Over the years Holzer developed longer texts, such as the Inflammatory Essays (1979–82), a series of texts of one hundred words each, written in a more caustic and aggressive language than the earlier work. Printed on coloured paper, they create a very visual discursive mosaic. As the title suggests, they are ‘inflammatory essays’ on intolerance, violence, rampant consumerism, the relations between the sexes and the abusive use of power. The artist uses texts by political thinkers in the communist and anarchist tradition (Lenin, Leon Trotsky, Rosa Luxemburg, Mao Zedong, Karl Marx, Friedrich Engels and Emma Goldman), but also texts by religious and liberal thinkers, or from popular literature. Besides their message, Holzer’s works are deeply poetic and have great powers of suggestion.

The first Inflammatory Essays were published in 1979 in a book entitled Black Book Posters. The texts were printed on green paper. Later Holzer edited the Inflammatory Essays in a poster format and hung them in the streets of Manhattan, selecting each location according to the nature of each specific message. Every week she hung new posters, printed in different colours each time, so passers-by would know they had been changed. These were signed posters covering the entire length of a wall in the manner of wallpaper and denouncing all forms of abuse (‘The most exquisite pleasure is domination. Nothing can compare with the feeling’), whether social (‘People must pay for what they hold, for what they steal. You have lived off the fat of the land. Now you are the pig who is ready for slaughter’), or psychological (‘Fear is the most elegant weapon. Your hands are never messy’). With her battery of meanings and forceful yet suggestive tone, Holzer’s flaming essays configure a cartography of meanings on contemporary contradictions. ‘Change is the basis of all history. The proof of vigor. […] “Nothing essential changes.” That is a myth. It will be refuted.’