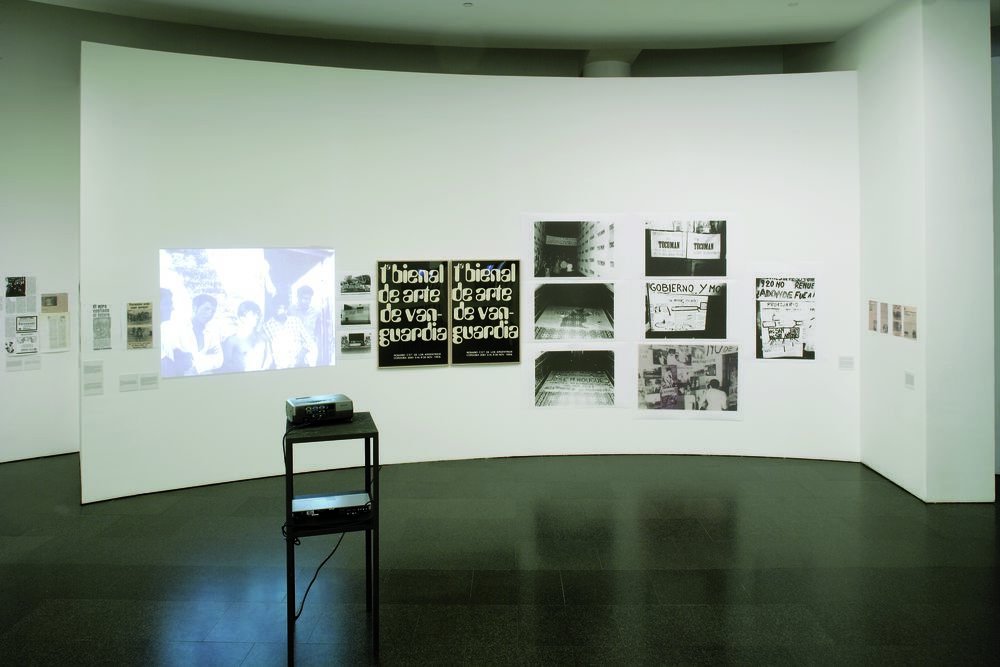 The collective project Tucumán Arde is one of the outstanding examples of political and investigative art in Latin America. Early in 1968, a group of artists, journalists and sociologists in Buenos Aires and Rosario (Argentina) carried out various actions which aimed to use art to expose the distance between reality and politics. They launched a project to investigate the appalling consequences of the economic measures introduced as a result of the application of neoliberal policies in Latin America. Some of its leading members were Graciela Carnevale, León Ferrari, Roberto Jacoby and Norberto Puzzolo.

The consolidation of the avantgardes in the late fifties in Argentina gave rise to the emergence of a generation of artists who had abandoned traditional supports and turned to the forms of action typical of conceptualism for their works. In that way they confronted official art (the so-called ‘jam art’), defended artistic expression as a critical intellectual activity, broke with the institutions and discarded the usual representation devices. Their intentions were to appropriate the resources and procedures of artistic expressions to make political accusations. “Art goes into action”. After several attempts they organized themselves around the I National Avantgarde Art Encounter, where they laid the foundations for common action and agreed to present collective works outside the usual artistic circuits. Their first action was Tucumán Arde (Tucumán Burns), where their purpose was to expose the crisis in Tucumán through an analysis of ‘Operation Tucumán’, launched by the Argentine dictatorship in 1966 and announced as a series of measures to promote industry and diversify agriculture. Tucumán Arde acted aside from official propaganda and condemned the closure of the sugar mills and the consequent crisis in the region, which brought about the destruction of the local trade union movement and even forced workers to love to other areas.

The work of Tucumán Arde was designed to raise awareness of the situation among a broader public than the art circuit. The group used the resources of the art of the moment to encourage the public to take part. Tucumán Arde used the media to camouflage itself and in that way avoid the censorship that was applied to revolutionary art. It constructed a suitable situation to prove that, through overinformation strategies, the media could impose a different reality, thus exposing the press’s power to manipulate. Tucumán Arde put itself forward as a programmatic model of a new art in which the artist had to assume an active role as protagonist of the social struggle.

In the words of one of the members of the group, León Ferrari, “Tucumán Arde used art to do politics. Many conceptual artists and certain examples of contemporary political art use politics as a theme for doing art”. Their intention was to use art as a revolutionary tool, thus taking part in the process of liberation of the country. After the Tucumán Arde project, which was never completed, the group was dissolved: most of the artists involved gave up art to devote themselves completely to political activism, whilst others, some years later, continued with their artistic task.

Documents related to the different actions and works produced by Tucumán Arde, 1968

Tucumán Arde was a project conceived to unfold in three stages. The first consisted of the investigation and recording of testimonies, the material that would be the basis of the exhibition. The artists made a first journey to Tucumán to collect information about the socioeconomic conflicts in the region, where the sugar mills that provided work for a large part of the population were being closed down, with the consequent general impoverishment. On a second journey they took photographs and recorded testimonies to back up the accusations they had made. They then called a press conference at the Museum of Fine Arts to give an account of the situation to the press, while the local police were forbidding people to have any contact with the artists after discovering their real intention to accuse. Meanwhile, in the cities of Rosario and Santa Fe a mysterious campaign was launched. First, posters appeared with the word ‘Tucumán’, then graffiti on the walls which read ‘Tucumán Arde’ (‘Tucumán is burning’), This first stage concluded with the distribution of enigmatic posters announcing the ‘First Avantgarde Art Biennial’, an event which, in theory, had no connection with the Tucumán project.

To collect the data and show up the fallacious contradiction of the government and the class that supported it, the group of avantgarde artists travelled to Tucumán, accompanied by technicians and experts, and proceeded to inspect the social reality of the province. The artists’ action process culminated in a press conference where they made public, in a violent manner, their repudiation of the complicity of the cultural and popular media, who were collaborating on the maintenance of a disgraceful, degrading social state for the working population of Tucumán. The artists’ action was done in association with groups of students and workers who were thus integrated into the production of the work.

The artists travelled to Tucumán with ample documentation about the economic and social problems of the province and detailed knowledge of all the information the media had written about its problems. This last report had been previously submitted to a critical analysis to measure the degree of distortion and falsification that had been practised on the facts. The next step was to write up the information provided by the artists and technicians, which served to make up the exhibition presented at trade union headquarters. And lastly the information the media had drafted on the action of the artists in Tucumán became part of the information circuit of the first stage.11 Fragments of Tucumán Arde (manifiesto), 1968. Printed and distributed while the work was on show in the city of Rosario. Taking part in the work: Eduardo Favario, León Ferrari, Juan Pablo Renzi, Roberto Jacoby, Graciela Carnevale, María Teresa Gramuglio and Nicolás Rosa, among others.

The second stage of the project consisted of an exhibition of the information collected in Tucumán. In the first days of November 1968, the headquarters of the Confederación General del Trabajo (CGT) trade union in Rosario was turned into a surprising space: the floor at the entrance was covered with the names of the owners of the sugar mills and their relations with local political power. Visitors had to step on the names in order to walk in. On the walls were the reports and reportages that reflected the situation in Tucumán, bringing out the relation between political interests and the crisis. Films, audiovisuals and photographs were part of the material used. The lights in the rooms were switched off every two minutes as a symbol of the average time it took for another child to die in Tucumán. The bitter coffee served to the visitors recalled the lack of sugar, related to the closing of the mills. In a Tucumán press document people could read: “The aim of Tucumán Arde is, using the media, to point out the contradictions of the Argentine government and the owner class concerning the closure of the sugar mills in Tucumán and the serious consequences which are general knowledge”. The public could take home the reports and documents that exposed the situation in Tucumán. On 25 November some artists organized the same Rosario exhibition in Buenos Aires. At the entrance a large banner was hung with the inscription ‘Visit Tucumán, garden of poverty’, in allusion to the advertising slogan ‘Visit Tucumán, garden of the Republic’. The jolly music of the local singer Palito Ortega provided an ironic counterpoint to the exhibition. In just a few hours the exhibition was closed down. The shows that had been planned for Santa Fe and Córdoba never happened.

The third phase of the project had been conceived as a closing of the information circuit, a kind of synthesis and assessment of all the activities. But given the adverse situation of the country, the activities had to be cancelled. 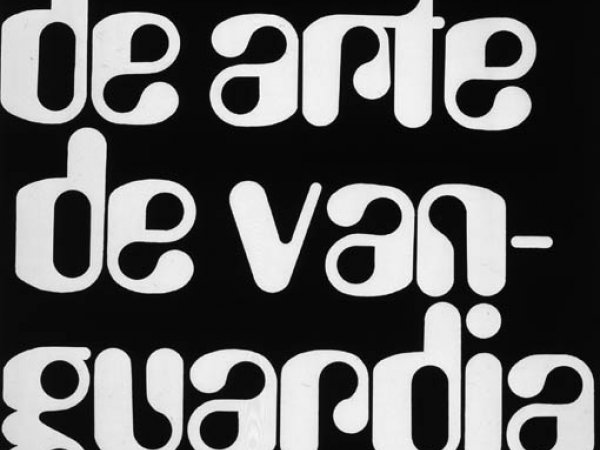 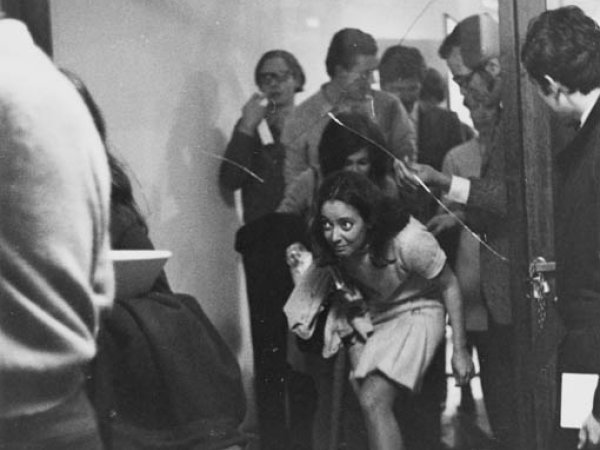 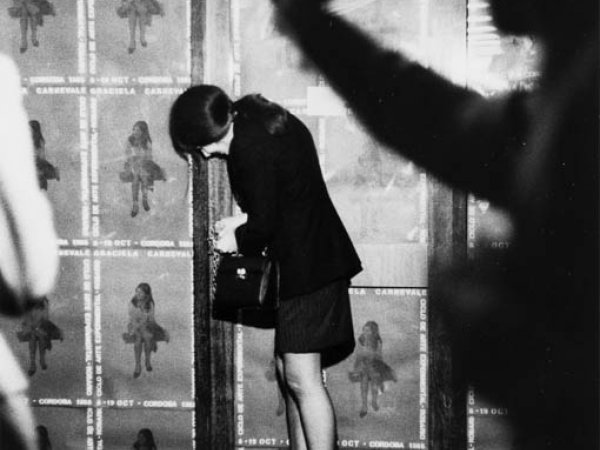 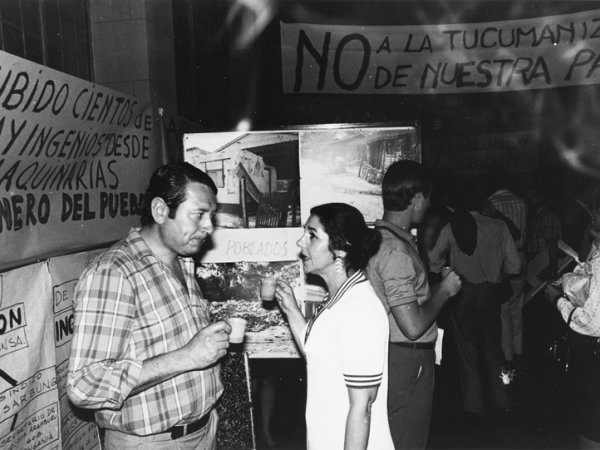 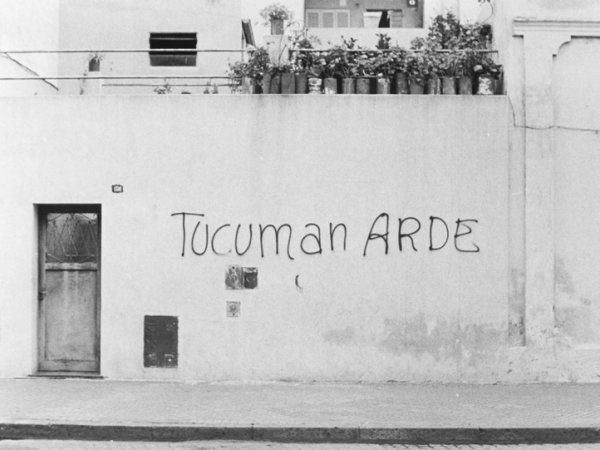 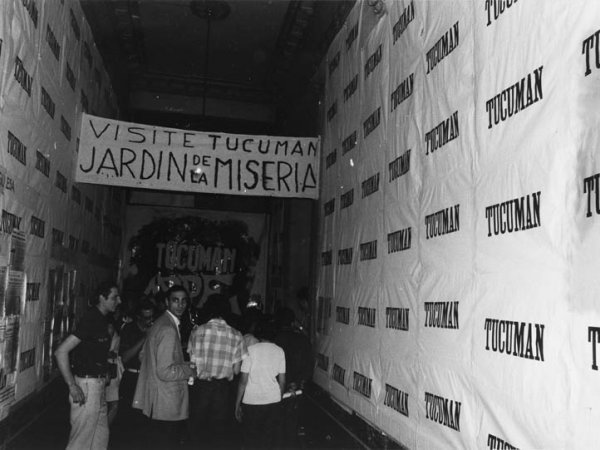