(...)All first showed their mature work around 1980-1981. It was shortly after this that they were packaged together to constitute a group which could provide both an answer to the previous “generations” who had dominated British sculpture since the war, and a much-needed counterpart to those young nationals, such as the Italian Transvanguardia, and the German Neue Wilden, then emerging abroad. But not only is the notion of a succession of generations in post-war British sculpture a problematic one, what is held in common is insufficient to distinguish these artists from certain others of a similar age concurrently making three-dimensional work elsewhere, such as the German Harald Klingelhöllen. Furthermore, the “New British Sculptors” share little with those figurative expressionistic painters who were concurrently gaining international art world attention. Their roots, by contrast, lie not in painting or conceptual art but in debates that centred on the extended forms of sculpture which developed during
the later sixties, including land art, process art, and installations. Nonetheless, what is shared goes beyond a certain aesthetic tradition, or legacy. More significant than the fact that these artists belong to the same generation, loosely speaking (all were born between 1948 and 1955), is their attendance at one or more major art college in London during the seventies. Equally important is the fact that after experimenting with various types of performance, installation and/or conceptually based work, by the end of the decade all had gradually begun to concentrate on self-sufficient, relatively contained, fixed objects: objects which, moreover, were made by hand, and were fabricated rather than crafted from mundane, familiar materials.

Other works by Tony Cragg 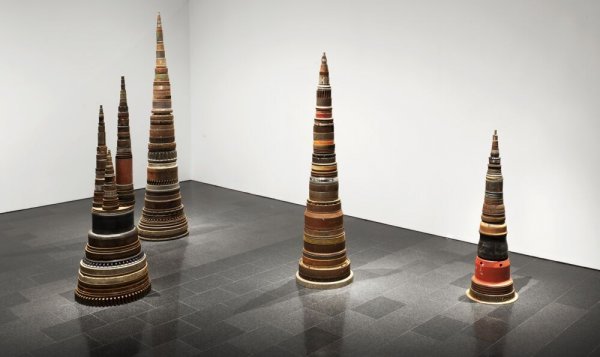 Tony Cragg
Generations
1988
See all works by this artist →
My work is my body, my body is my work.
Helena Almeida