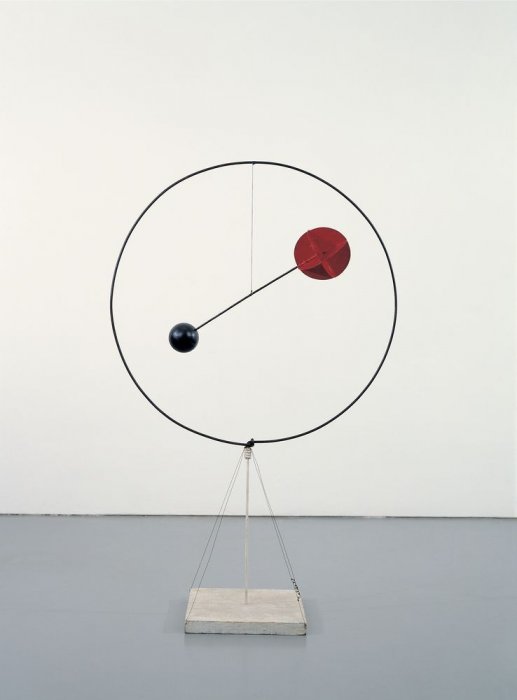 These two mobile sculptures by Alexander Calder were donated by the artist to the Catalan architect Germán Rodríguez Arias (1902–1987), a pioneer of rationalist architecture in Catalonia, founder member of the GATCPAC and a friend of the architect Josep Lluís Sert. It was Sert who introduced Calder to Rodríguez Arias in 1932, while the artist was in Barcelona, invited by Joan Miró. Rodríguez Arias donated the sculptures – never previously shown – to the city in July 1988. They were seen in public for the first time in 1990 as part of the exhibition Homenaje al racionalismo (Homage to Rationalism), organised by the furniture store Manbar, Moble Internacional, at Via Augusta, 61, Barcelona, after the restoration of the building. A rationalist building designed by Rodríguez Arias, it was home to the architect and it was here that Calder stayed during his second visit to Barcelona in early 1933.

The works date from a very significant moment in Calder’s creative development. The artist had moved to Paris in 1926, where he met artists from the European avant-garde with whom he established long-standing friendships. Decisive among them were Marcel Duchamp, Jean Arp and Joan Miró, with whom he shared creative and personal affinities. A key influence in the new volumetric abstraction created by Calder was his visit to Piet Mondrian’s studio in October 1930. Months later, he would produce his first mobile sculpture. In 1932, Calder presented his ‘mobiles’, as Duchamp would call them, for the first time. Later on, Arp coined the word ‘stabiles’ for Calder’s floor pieces. In both cases, Calder refined the materials until they were reduced to a pure sign in the air.

The two works in the MACBA Collection were produced in 1931, a time of creative maturity in Calder’s work. In the first one, the sphericity is created by the crossing of a red ball and a black ball on the opposite side. Calder hangs these elements as if they were weightless and frames them within a large ring. The remainder of the work, i.e. the base, is nothing but a support still needed by the artist on his way toward weightlessness and dematerialisation. In the second sculpture, which rests on the floor on a triangular wire base, immateriality is achieved by balancing some painted wooden balls. Both works are ‘stabiles’ that sit on the floor, yet their play on movement and equilibrium is as significant as in other better-known mobiles by the artist.

At that time, Calder was fascinated by the new theories on the solar system. He was interested in the idea of constellations and shooting stars, in great celestial systems with small and seemingly random planetary displacements yet subject to very strict rules: a conceptual framework that allowed him to configure a creative universe with minimal spherical elements gyrating in the manner of planets. As in the universe, the equilibrium of the whole prevails over the individual elements. As in the real model, the hidden rules bring coherence to the system.

Other works by Alexander Calder 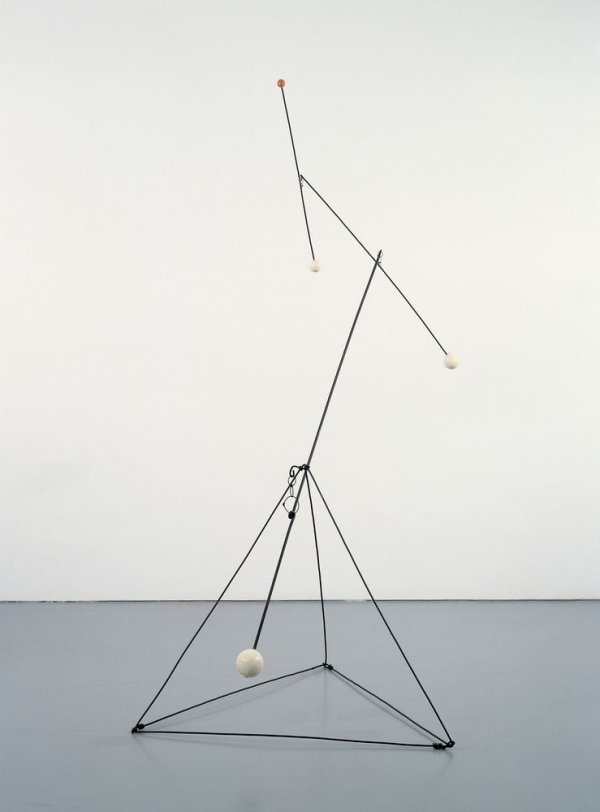 Alexander Calder
Sense títol
1931
See all works by this artist →
I’d really like to think that the artist could be just another kind of material in the picture, working in collaboration with all the other materials.
Robert Rauschenberg