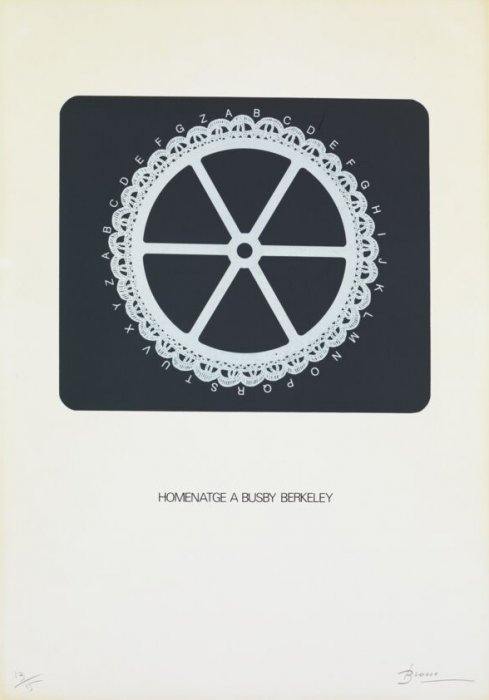 How does the figurative creation of visual poems and object poems differ from verbal invention? In other words, does the image derive from a verbal stimulus?

It depends on the mood and how the stimulus occurs. I can go down the street and hear a few words that will later lead to others. Or use dream material. Sometimes, reading the paper I receive a stimulus that will have a consequence elsewhere. In this respect, one can become a great sounding board. Or a magic lantern. Any event is good to fire the imagination. Always be open, a state that cannot always be maintained. I don’t need to take drugs because sometimes I see stimuli everywhere. The most unexpected event can come from everyday reality. The streets, if you know how to look, offer real ballets on every corner, not to be confused with vellets or old people in Catalan (laughter). You cross the street, you see a girl in a long dress, a car passes, then a piece of paper falls from a balcony and you have a ballet in motion. It’s a question of knowing how to look. However, art does not consist of explaining things. It is very common to see individuals who theorise really well but give them a pencil and they’re unable to produce anything worthwhile. Two plus two does not always equal four. The naïve painters, though very limited, made paintings of extraordinary poetry and great strength. The conscious is a constellation of the subconscious. A hypnotist friend of mine argued that hypnotism is real, and that’s why he practised it, but everything around him was rubbish. He wanted to expose the tricks of the deceitful. He did experiments with mediums. According to him, the most gifted mediums were abnormal people. You have to separate the two domains. It seems that the outer consciousness weakens the inner world and instinct. Art involves a little of all this. You also have to know how to exploit the wealth of chance, which obviously has its own laws but are unknown to us. Sometimes I think that chance does not exist: something happens because you need it to happen.