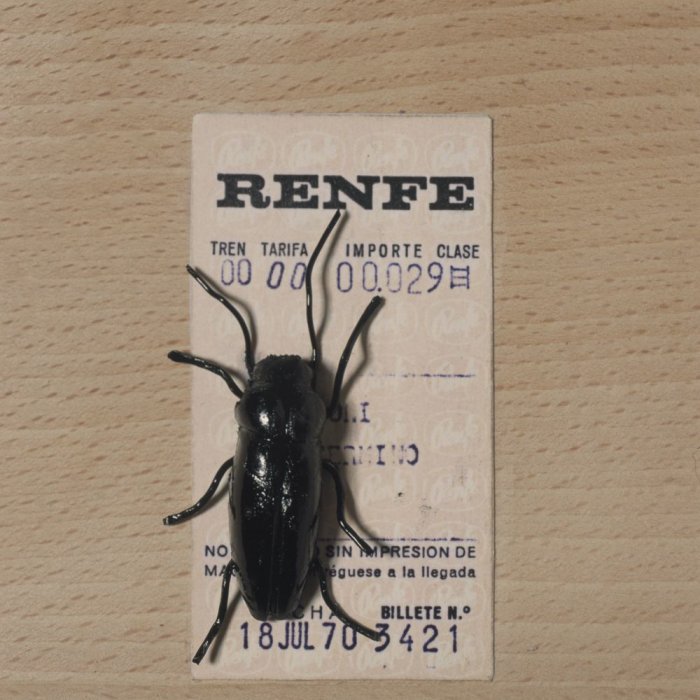 ‘I really like beetles. In the world in which we live I consider beetles to be a virtuous race. People hate these creatures because they’re dirty, but there is an aspect of the human race that is more rotten than the beetle. Instead, I think it is a noble animal, which comes from the Egyptians; I love it.’

How much do your object poems owe to Marcel Duchamp?

I think any thinking artist today owes much to Duchamp. Once I was in Paris and there was a large Picasso exhibition; they said Picasso had opened a new stage. I think he closed a stage and Duchamp opened a new one. Visual poetry was one of his creations, although it existed before Duchamp in a different way. This new creativity that expands the concept of the artistic profession, so that a painter can make sculpture and sculpture can become painting, without such clear boundaries, is a viewpoint Duchamp contributed through his experiments. I mean, ‘readymades’ are a newer concept than painting. Picasso and Miró pushed painting to the limit, but the man who changed the mentality is Duchamp.

Does visual poetry and the object poem emphasise an interest in absurdity, contradiction and ambiguity, more than the literary work?

No, it’s the same approach but with a different tool; there are all kinds of objects: critical, epic, lyric..., because at this point visual poetry and object poems are very similar to the poetry of the literary code; genres can coincide.

Do you look for or find the object poems?

A bit of both. Some come to me, others I search for. Generally, of those made to date many of them I have dreamed; I see them in dreams, I wake up and write them down, and if it’s not the object itself it’s the starting point: here is this spool of thread, then its presence triggers some ideas, but the spool is a manifestation that has come from within. Generally my work comes from the inside and goes outwards, never from the outside in; this doesn’t mean that, as in the ode to Macià or Companys, the opposite cannot be true, but in general the ideas and processes come from within.