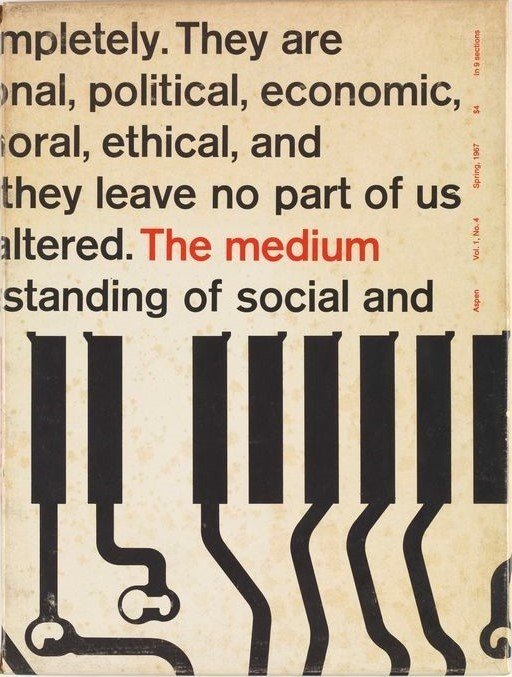 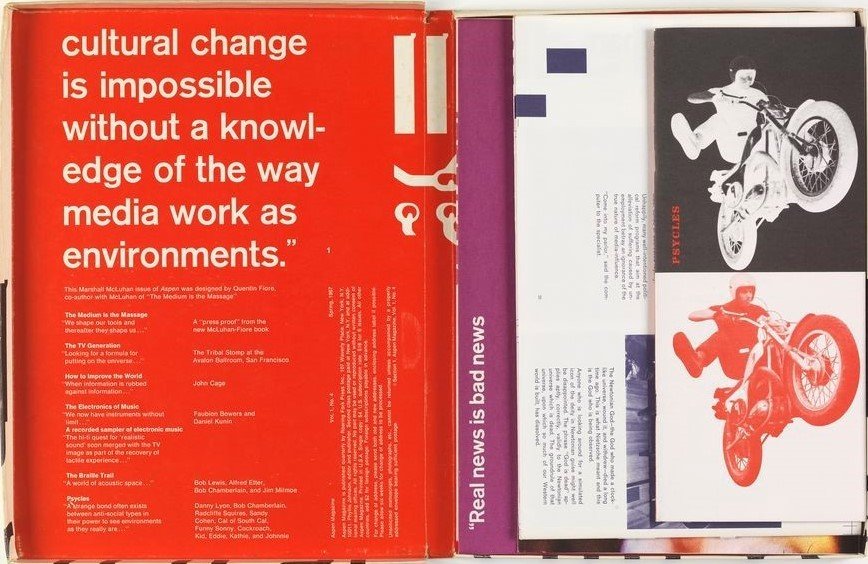 ASPEN. The Multimedia Magazine in a Box was an idea of Phyllis Johnson, editor of Women's Wear Daily and Advertising Age. Whilst spending the winters in Aspen, Colorado, she had the idea of launching a multimedia magazine designed by artists which would bring together culture and play. In the winter of 1965 the first number was published: "We wanted to get away from the traditional magazine format, which we regarded as too closed, too restrictive...," said Johnson.

The magazine was published between 1965 and 1971 and ten issues were published. Each copy, which was delivered to the subscribers in a box, contained materials produced on supports of different kinds: printed material, sound recordings, reels of Super 8 film, etc. Each number had a different designer and editor. "ASPEN has to be a kind of time capsule of a particular period, a point of view or a person," the founder said. So each issue of the magazine dealt with a different subject: No. 1, "The Black Box," and No. 2, "The White Box," were related to the title of the magazine, ASPEN, and referred to the film and music festivals held in the exclusive ski resort, the wildlife in the mountains and the local architecture. No. 3, "The Pop Art issue," marked a major leap forward. It was devoted to Pop Art and the New York cultural scene and the people in charge were Andy Warhol and David Dalton. Quentin Fiore designed No. 4, which was about Marshall McLuhan and the Mass Media society. Nos. 5 and 6 were a double number on conceptual art, minimal art and postmodern critical theory. No. 6A was an extra number sent to the subscribers and it looked at performance in New York, focusing on the Judson Gallery in the city. No. 7 dealt with the new British art scene, whilst No. 8, designed by George Maciunas and edited by Dan Graham, concentrated on Fluxus. No. 9 was an in-depth examination of psychedelic art and literature. The last issue, No. 10, was about Asian art and philosophy.

The magazine ASPEN, which is an undoubted example of creativity in the field of publishing, numbers some of the leading artists of the 20th century among its contributors. Among the ones who presented sound works are Yoko Ono, Marcel Duchamp, Merce Cunningham, John Cage, The Velvet Underground, William S. Burroughs and La Monte Young. Aspen also includes films by Robert Rauschenberg, Hans Richter, László Moholy-Nagy, Robert Morris and Stan VanDerBeek.

Other works by ASPEN 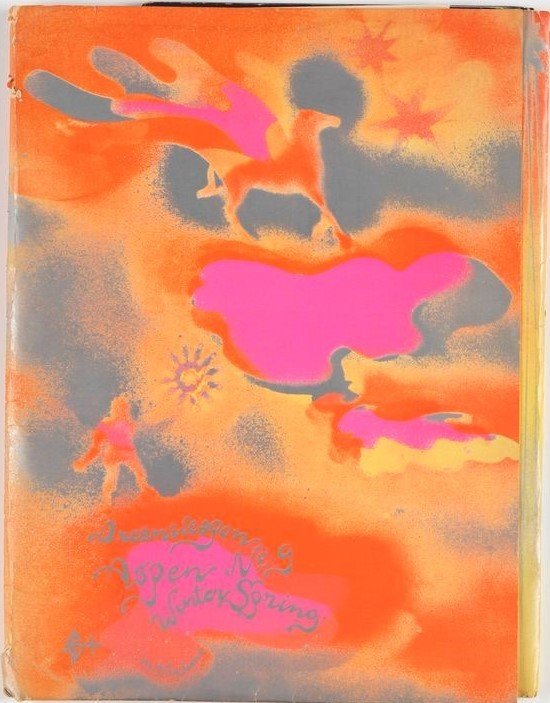 ASPEN
ASPEN. The Multimedia Magazine in a Box. No. 9. The Psichedelic issue
1971
On display
Graphic material 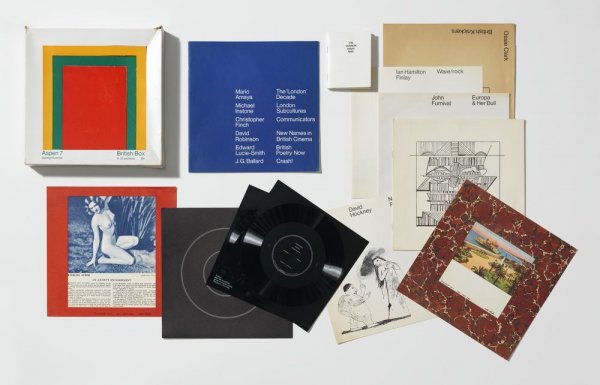 ASPEN
ASPEN. The Multimedia Magazine in a Box. No 7. The British issue
1970
On display
Graphic material 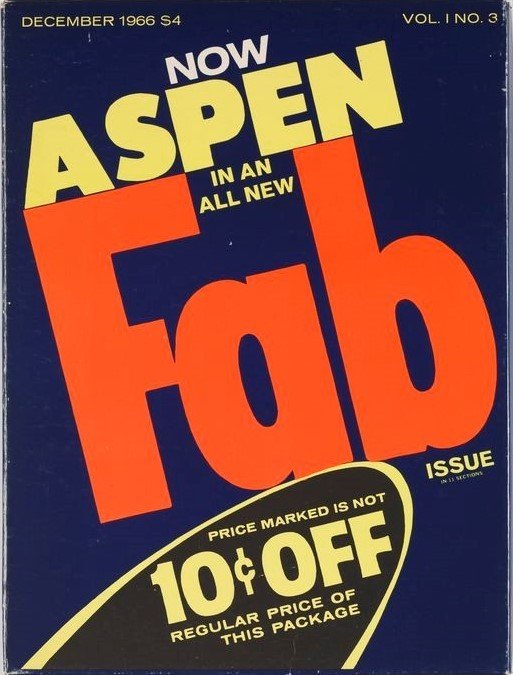 ASPEN
ASPEN. The Multimedia Magazine in a Box. No 3. The Pop Art issue
1966
Graphic material 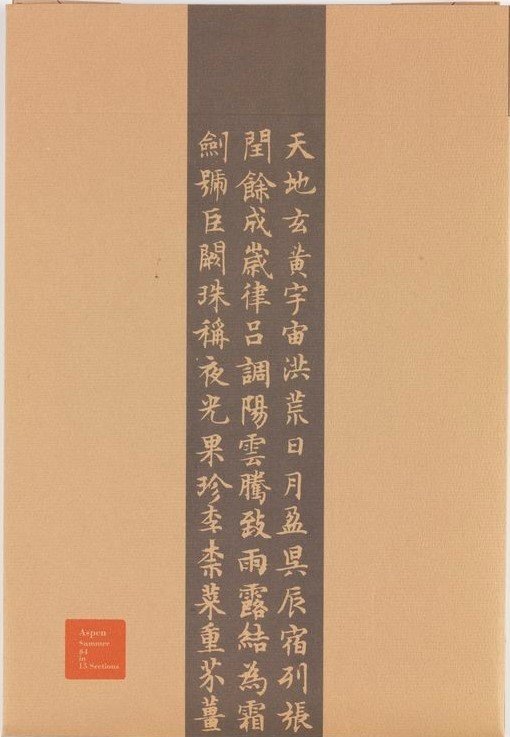 ASPEN
ASPEN. The Multimedia Magazine in a Box. No. 10. The Asia issue
1971
Graphic material 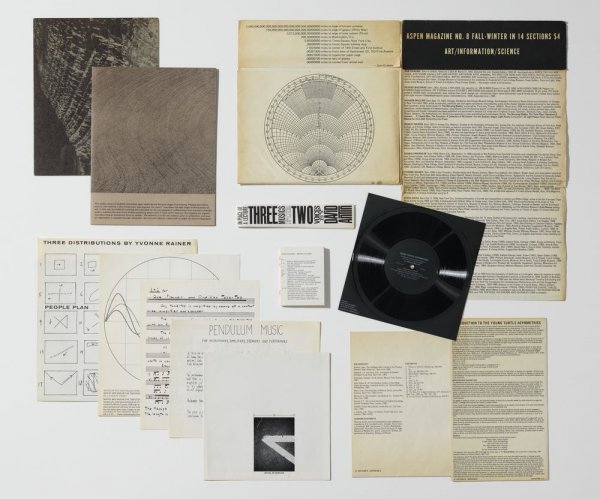 ASPEN
ASPEN. The Multimedia Magazine in a Box. No 8. The Fluxus issue
1971
Graphic material 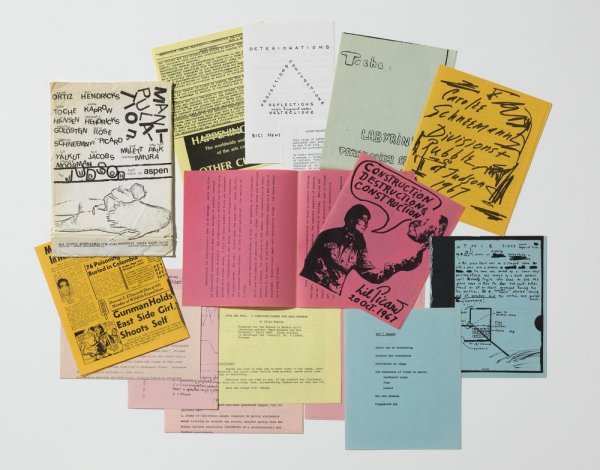 ASPEN
ASPEN. The Multimedia Magazine in a Box. No 6 A. The Performance Art issue
1969
See all works by this artist → 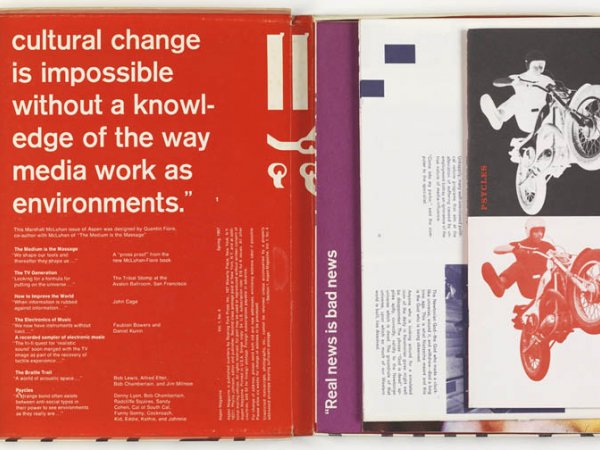