Joan-Josep Tharrats studied at the Escola Massana, Barcelona, in the mid-thirties, before the Civil War. After almost four years compulsory military service, in 1942 he resumed his artistic activity. Initially close to Impressionism, he quickly gravitated toward abstraction. In the late 1940s, he founded the innovative group Dau al Set and the homonymous magazine, alongside Joan Brossa, Modest Cuixart, Joan Ponç, Arnau Puig and Antoni Tàpies. Together they championed the artistic avant-garde at the height of the Franco regime, and a good part of the magazine Dau al Set was printed on the press in his own studio. Tharrats was leader of the Catalan avant-garde in the post-war period with an oeuvre that evolved from a linear abstraction derived from Surrealism to a textured, colourful and free-form Informalism. He pioneered his own version of printing techniques, which he called ‘maculatures’ and which began with the sheets that got stuck between the rollers of the printing press and were overprinted by successive pulls. He also made posters, murals, stained glass windows, mosaics, jewellery, stage sets and illustrated books. He was an art theorist and poet, publishing the poetry magazine Negre + blau (1983). Since 1991, a large part of his graphic work can be seen at the Fundació Tharrats d’Art Gràfic, Pineda de Mar (Barcelona).

He exhibited regularly since 1949. In 1959 he participated in the São Paulo Biennial and in the Venice Biennale in 1960 and 1964. There have been retrospective exhibitions at the Fontana d’Or, Girona (1975), Centre d’Études Catalanes, Paris (1985), Palau Robert, Barcelona (1993) and Ashikaga Art Museum, Japan (1996), among others. His work is included in the collections of MoMA and Solomon R. Guggenheim, New York; Tate Gallery, London, Museo Reina Sofía, Madrid; and MACBA, Barcelona, with a prominent presence in the Salvador Riera Collection of contemporary Catalan art. 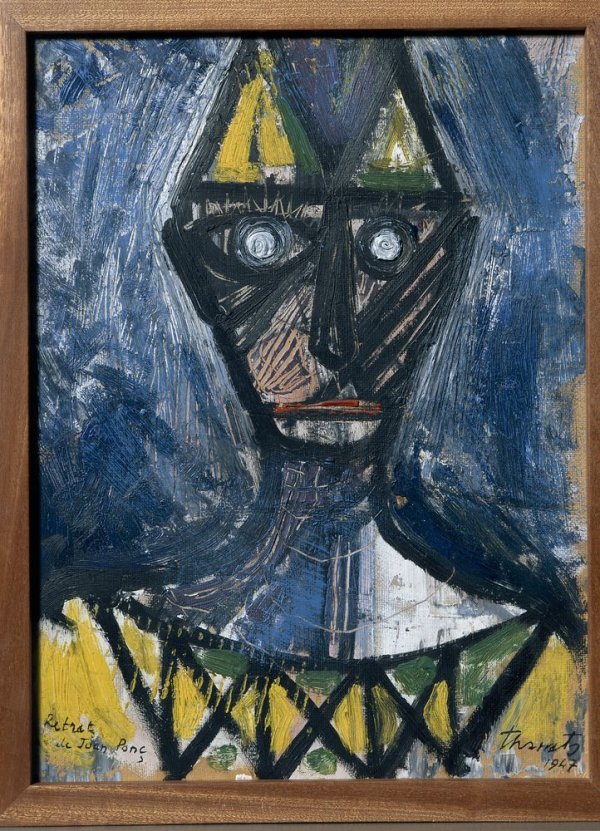