The photographer Helen Levitt was born in 1913 in Bensonhurst, in the district of Brooklyn in New York. Following her true vocation, she left school before graduating and moved to the Bronx. There she worked for four years with a commercial photographer, learning the technical skills of photography. She soon began to work on her own account. They were difficult times, the America of the thirties sunk in a deep economic and social crisis, a situation that led the photographers of the time to denounce social problems and produce documentary work with strong critical and social overtones. Levitt joined that tendency until she discovered the work of Cartier Bresson and realised that photography can be something more than documentary.

Inspired by the work of Cartier Bresson and Walker Evans, Levitt produced the first works of her long artistic career with a 35 mm camera. She depicted what she knew best: the atmosphere, the street life and the people in the poorest districts of New York which so fascinated her and became the main subject of her photographs. It is these urban vignettes filled with lyricism that have made Levitt a unique artist, outside the conventions of her time. In them she often portrays children from the lowest classes, but there is no sadness or social criticism, only innocence. She shows us happy children playing, the pleasant face of those districts.

From 1938 to 1939 she studied with Walker Evans, who became her mentor and friend. In his studio she met the writer James Agee, who years later would write the introduction to her first book, A Way of Seeing. Although it was produced in 1946, it was not published until 1965. It is a collection of Levitt's work in black and white in the forties.

In 1941 she travelled to Mexico, where she also took pictures of children playing in the streets. The fruit of that journey was the book Helen Levitt: Mexico City, published in 1997. That was the decade when she began to take part in film projects. She worked as assistant to the director Luis Buñuel on the editing of documentaries and later, with her friend James Agee, on the films The Quiet One (1949) and In the Street (1952), which won awards at the Venice and Edinburgh festivals. The legendary independent film director Jonas Mekas wrote that those films could be considered precursors of independent cinema today, since they marked the beginning of a new style based on the spontaneity of the action and the handling of the camera. From the fifties Levitt concentrated totally on the cinema and partially abandoned photography.

In the early seventies she went back to photographing life in the working class districts of New York, but this time she used colour. These photographs, with the ones taken in Harlem in the thirties and forties and her last works in black and white from the eighties and nineties make up the book Crosstown, published in 2001. The book shows us the changes that have taken place in street culture in New York, as well as the evolution of her photographic eye.

Helen Levitt, who still lives and works in New York, is one of the outstanding figures of the movement known as Street Photography, which spread through the United States in the thirties, and has created some of the unforgettable photographs of the streets of New York in the thirties and forties. Her latest book, Here and Now, published in 2003, is a collection of over ninety previously unpublished photographs. 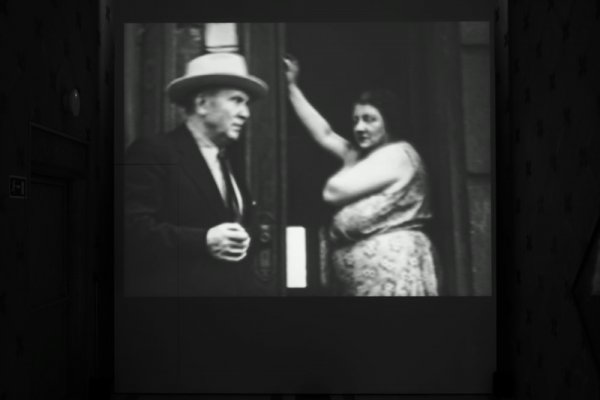 MACBA Collection
Visit the Collection
A single image can bear witness to the past and anticipate a foreseeable future.
Ignasi Aballí