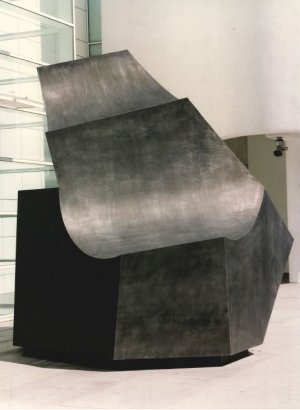 Original state of the sculpture in 1998

In 1998, Jorge Oteiza's sculpture La ola was installed on the museum's podium. Starting from a bronze model created in 1957, the artist commissioned its production in its current dimensions to the sculptor Pere Casanovas. In accordance with Oteiza, the work was executed with an aluminium structure protected with a coat of primer and a patina, which left the irregular surface of the aluminium visible and reflected light in a way similar to that of the sea. 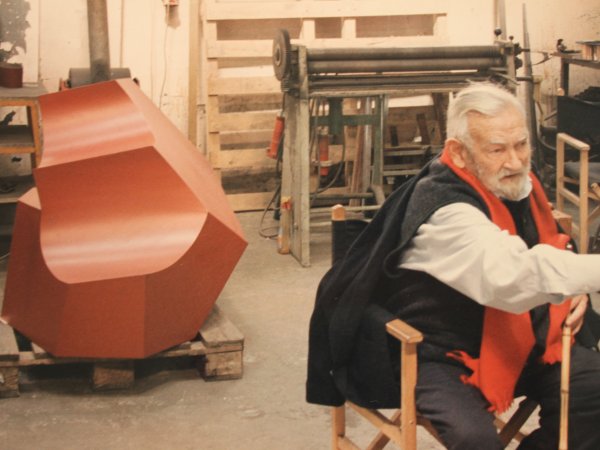 Jorge Oteiza with a model of the sculpture. Photo: MACBA Collection. MACBA Foundation. Gift of the artist. Production of the work sponsored by Rodés Family.
Imagen 2 del carrusel 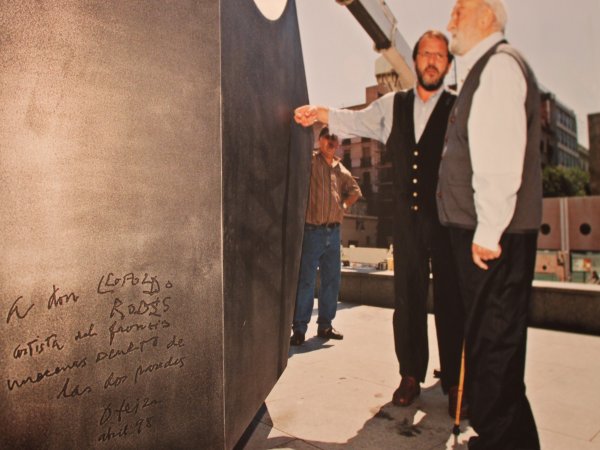 Jorge Oteiza and his assistant in front of the sculpture the day it was installed. Photo: MACBA Collection. MACBA Foundation. Gift of the artist. Production of the work sponsored by Rodés Family

But soon the work began to deteriorate because of three main factors: bird droppings were a corrosive agent for the work’s surface layers; skates were an erosive agent, due to wheel friction; and graffiti, done with various types of paint, which was often very difficult to remove (even with aromatic hydrocarbon or alcohol).

Once the artist and the sculpture’s producer were consulted, it was agreed to maintain the sculpture by performing a periodic cleaning with pressurized water, afterwards applying a thin layer of paint as a patina. To facilitate the process, in 1999 the Pere Casanovas sculpture workshop applied a matte anti-graffiti coating.

Over time it became more difficult to maintain the sculpture’s original surface. Therefore, in 2005 an agreement was reached with Pere Casanovas – Jorge Oteiza had already passed away – to strip the whole sculpture down in order to apply a primer and a coat of polyurethane paint that would make it possible to maintain the work in good condition by cleaning with pressurized water and a periodic repainting with the sculpture’s original paint. 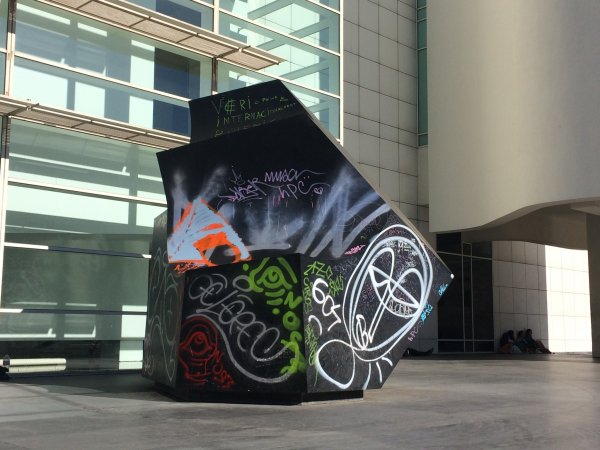 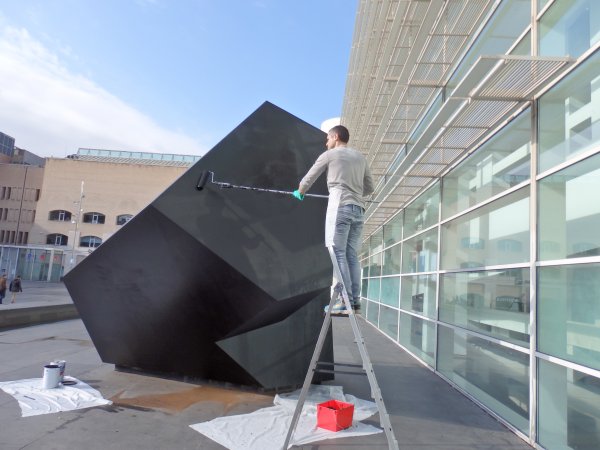 This maintenance process worked for several years, until the sculpture became the foundation for the increasingly frequent realization of graffiti. It was necessary to find a system that would allow the work to be maintained without the need to repaint it periodically.

On this occasion, in order to determine the most appropriate treatment, the museum contacted the Jorge Oteiza Foundation, Pere Casanovas and the Amanci Sala workshop, experts in industrial coatings, sandblasting and industrial resins.

Due to the sculpture’s location in a public space and the complexity of the treatment, it was necessary to uninstall the piece and move it to the Amanci Sala workshop, which handled the intervention. 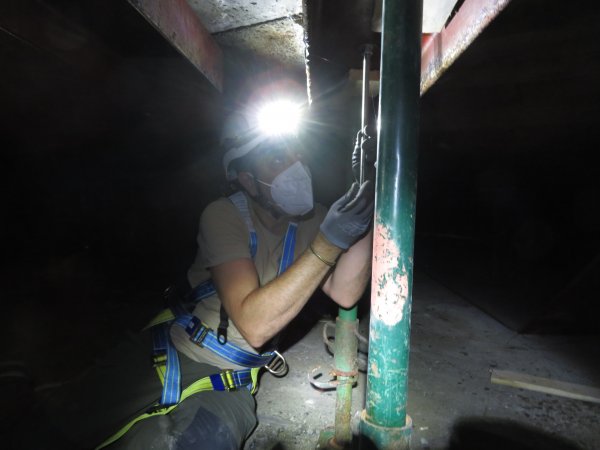 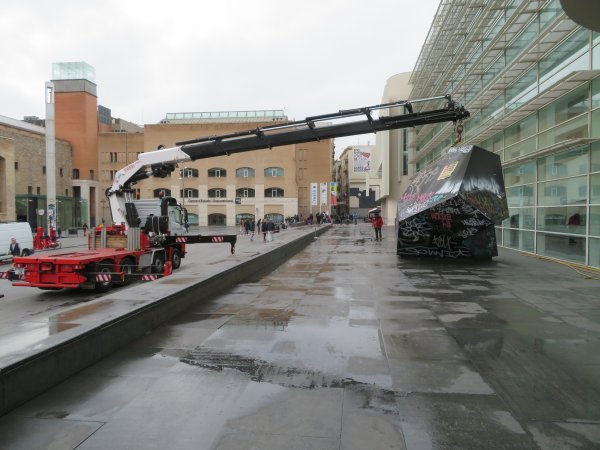 Removal of the sculpture for restoration. Photo: Silvia Noguer

The first step was to remove the paint through colloidal silica blasting. Once the sculpture was stripped, the deformations and losses in the aluminium metal structure were treated. Then a 50-micron-thick base coat of International’s Intergard 251HS zinc phosphate epoxy primer was applied. 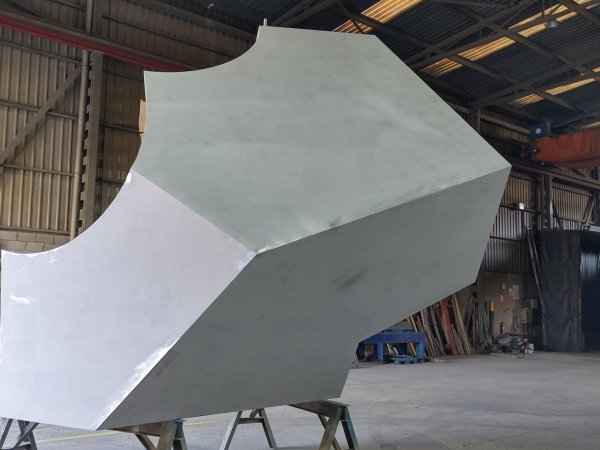 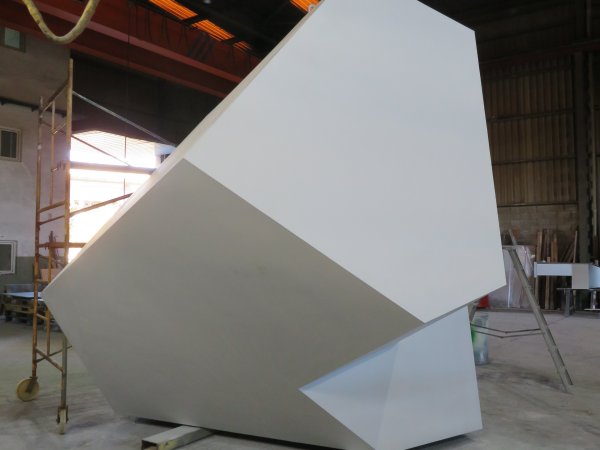 After 24 hours, when this first coat was dry, it was painted in the black colour characteristic of the sculpture, specifically with International’s Interthane 990 enamel two-component polyurethane paint in satin black RAL 9005. 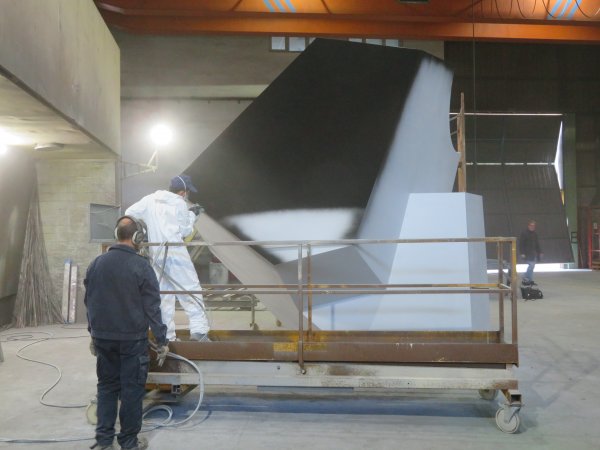 The paint was allowed to cure for 10 days before the application of a PLX Cristal anti-graffiti coat.

Finally, La ola was reinstalled in its place of origin at the museum with the same anchoring system as it had previously; i.e., three stainless steel bolts threaded into the base and secured under the square’s podium. 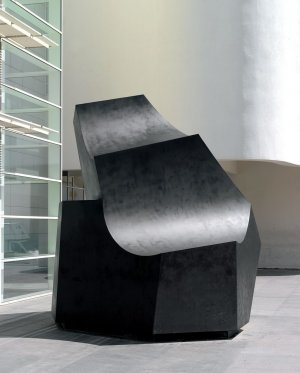 Learn more about this work